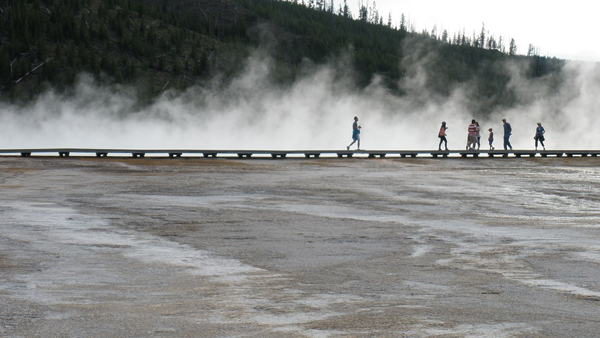 Jessie Joo, the general, has been a part of my life for long enough that I know how her gentle suggestions can slowly turn into more pointed reminders if they’re ignored. It was time, she said firmly, for a trip to see our son and my siblings in the United States. My sisters, in particular, had become the eonni (older sisters) she never had.

I had remarked occasionally over the years how much I like driving through the U.S. desert Southwest. Because she had become a great fan of Western novels and films during the time we had lived in the United States, she revived the idea of a car trip.

Our first plan was to drive to the Midwest and fly back, but the penny-pincher in me revolted when I discovered the cost of one-way car rentals and air tickets. She agreed to drive both ways, although it later became clear that she did not really comprehend the distances involved. Her only demand was that I remember one thing: shopping was not to be just an afterthought.

We touched down at Los Angeles, somewhat the worse for wear, picked up our car and found a motel an hour or so outside the city. In the morning we set out for Phoenix, Arizona, where the weather forecast said the high temperature would be 117 degrees Fahrenheit (47 Celsius). While the general tried to comprehend what 47-degree heat would be like, she was also watching the scenery change from the relative green of the Pacific coast to desert earth tones. I heard several intakes of breath and quiet exclamations from the passenger seat; just as I had 40 years earlier, she was falling in love with the desert.

My friends in Phoenix, a former U.S. executive in Seoul with a lovely Korean wife, had invited us to stay with them, and the two women hit it off well, exchanging humorous (to them) stories about the burden of being married to Western barbarians. The next morning we drove about 40 miles to the Effus Ranch, owned by a friend of our hosts. 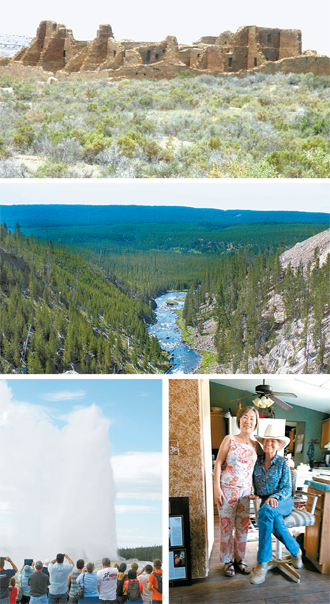 From top: A geothermal pool at Yellowstone National Park, Wyoming; ruins of a Chaco civilization structure at Chaco Canyon National Historical Park, New Mexico; a valley at Yellowstone, dominated by the area’s signature lodgepole pines; (left) Old Faithful geyser, Yellowstone; the general with Rosie Lloyd, owner of the Effus Ranch in Wickenburg, Arizona; map of the 8,800-kilometer odyssey; along highway I-40 in eastern New Mexico. Photos by the author

Scenes from a Western novel

What we found was something directly out of a Western novel. The ranch owner, Rosie Lloyd, is a tall, slim and striking blonde woman of perhaps 60 years. Her ranch hand, Don Salyers, is a laconic, slim-hipped man of indeterminate age with a drooping moustache and leathery skin; Hollywood could not have cast both of them better for their roles. We poked around the ranch, looking at three calves being hand-raised, a string of horses for the ranch’s sideline business of trail riding, and of course, the scenery - 19,000 acres of ranch land in the Sonoran Desert that supports only about 70 head of cattle. (That ratio of cattle per acre is not unusual; it can take anywhere from 20 to 640 acres to support a single head of cattle in Arizona.)

Back on the road, we toured the Petrified Forest National Park and pushed onward for New Mexico and points east. Studying the map, the general suggested that we stop at Chaco Canyon National Historical Park, about 60 miles off our direct route.

Getting there turned out to be a challenge. For whatever reason (I suspect pressure from Indian tribes who consider the site sacred and fear damage by too many tourists), the roads to the site are unpaved, and in the desert summer heat we didn’t spend too much time exploring the site on foot. But the setting, a large wide canyon carved out over eons, and the ruins dating back to the ninth century, were both thought-provoking. The canyon is a Unesco World Heritage Site.

“One adventure per state!” the general exclaimed as we pushed on through New Mexico. I explained to her that we would need closer to three months than three weeks if we did that; she was still having trouble with the sheer size of the West. And indeed, the next day was the longest drive of the trip - about 625 miles through the rest of New Mexico, across the Texas panhandle, up through Tulsa and Oklahoma City and into Springfield, Missouri. The next day we continued on to St. Louis, for three days with family and friends. Then it was across Illinois and into Indiana, where our son endured a barrage of motherly love, tears and pointed advice, but still allowed that he was happy to see us.

Rhythm of the road

Now, Yellowstone National Park beckoned from 1,500 miles away. Even though I’m a Midwestern boy myself, I’ll admit that the endless corn and soybean fields in Illinois and Iowa don’t provide a lot of scenic diversions. But we had caught the rhythm of the road and, fortified with an ice chest full of drinks, sandwich meats and cheese, we pushed on, often picnicking at highway rest stops for lunch. We stopped in Lincoln, Nebraska, to see my daughter for the first time in far too many years.

Halfway through Nebraska, the scenery became more interesting again as we gradually climbed into the high prairie. As we traveled along the routes of the Mormon and Oregon trails used by 19th-century pioneers, farms became fewer and cattle ranches greater in number. Elevation markers announced our ascent from St. Louis’s 625 feet above sea level at every thousand-foot change. The highest point we reached, near Yellowstone Park, was just over 9,000 feet - roughly the elevation of Mount Baekdu. When we reached the Wyoming border, the general looked at the city names on our route ahead. Many of them - Casper, Cheyenne, Fort Laramie - she knew from her beloved stories of cowboys, rustlers, cavalry and Indians. 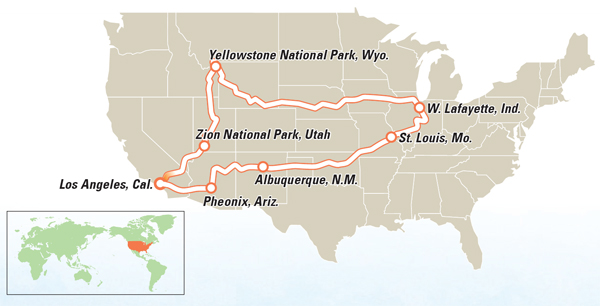 Yellowstone National Park was almost everything we hoped it would be. Before entering the park we stopped to see the Grand Tetons, another national park adjacent to its better-known sibling and famed for its majestic mountains. Moving on to Yellowstone, we spent most of two days walking among the many hot springs and other geothermal displays, and of course watched the Old Faithful geyser put on its show. But time pressure was beginning to set in, and we did not see nearly as much of the park as we would have liked. “Next time,” we vowed.

Exiting the park into a 30-mile stretch of Montana, we started south, headed for Idaho, Utah and Las Vegas on the way back to Los Angeles. In Idaho Falls, Idaho, I had a brainstorm. I asked a passerby to direct us to a Western-wear store. We found it, walked in, and the general’s face lit up in a happy smile. It had everything from bridles, bits and saddles to Western clothing, boots and headgear. She found a pair of cowgirl boots to add to her collection, and I picked up a black Stetson felt hat and a shirt with a western-style yoke. Now we were both set for the streets of Laredo - “Get yourself an outfit and be a cowboy too,” as the Smothers Brothers sang.

At a rest stop on southbound Interstate 15, the general headed for the women’s restroom. As she was entering, an American woman was coming out, her nose wrinkled in distaste. Inside the room, the unmistakable aroma of kimchi filled the air as a Korean woman washed out several containers in the sink. She and her husband were returning home from Yellowstone, and had packed a week’s supply of the Korean staff of life to avoid withdrawal symptoms while on the road.

Idaho was lovely, but Utah was breathtaking. The state is about 2.2 times bigger than South Korea in area but has fewer than 3 million residents, 80 percent of them are congregated in a narrow north-south corridor that runs from Brigham City through Salt Lake City and Provo. That leaves room for a lot of spectacular desert, especially south of Provo, where every few miles brings a new wonder. The general had her first experience driving at 130 kilometers per hour (81 miles per hour) on a stretch of interstate highway where the speed limit was 80 miles per hour. She pronounced it a bit stressful at first but exhilarating. Even speed limits in the West are larger than life.

Our last real adventure was a stop at Zion National Park in southern Utah. We started at Kolob Canyons, a part of the park that presents vistas of towering mountains and narrow canyons that has to be seen to be believed. In the main part of Zion, we found that cars were prohibited on the main scenic route; free tour buses departed every few minutes and stopped at several spots along the way. In retrospect, we probably did not give Zion its due; we were perhaps a bit overloaded at this point by natural wonders.

A stretch of Interstate 15 through canyons near the Nevada-Arizona border offered still more scenic views, and as we drove across California the general mopped up with a few more forays into outlet centers to make sure she hadn’t missed a single bargain.

Suddenly, 20 days had passed, and it was time to go home.

The GPS says we put about 8,800 kilometers on the odometer. I had expected that the general would nap occasionally in the back seat during the trip, but she was too interested in the passing views to miss any of them. We traversed 15 states in 20 days; I did not calculate the number of outlet stores we inspected.

Touring the U.S. West by car can be a great way to see a beautiful part of the world on a modest budget. Our expenses included $350 for the car rental, about $700 for fuel (our Honda Accord got 35 miles per gallon, or nearly 15 kilometers per liter, in highway driving) and an average of about $60 per night at motels. That latter cost could have been reduced had I used the Internet more assiduously and checked prices at motels a bit away from the highway exits. Our food costs were rather modest; we probably ate more fast food than we should have, but there was always fruit in the car for snacking and to accompany the deli sandwiches we assembled for many of our lunches. Shopping was probably the largest single expense of the trip.

Back home, I asked the general for her biggest impression of the trip. She had already mused aloud occasionally about a house in the desert where we could watch the sunrise from the porch with a cup of coffee in hand. She paused for a moment at my question, and said that she could not get over the sheer scale of the West - how huge it all was and how beautiful.

My cowgirl is back in Korea, but her heart is still somewhere in southern Utah.