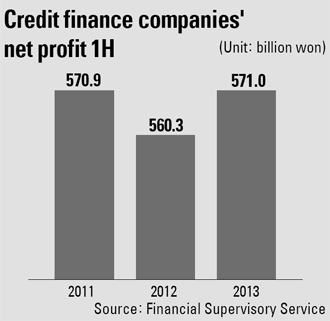 Net profit at local credit finance companies increased almost 2 percent in the first half of this year from last year, mainly due to a drop in funds costs, the country’s financial regulator said yesterday.

According to the Financial Supervisory Service, the combined net profits of 58 credit finance companies, including capital financing firms and leasing companies, reached 571 billion won ($525.5 million) in first six months of this year, up 1.9 percent from the previous year. The increase in their earnings came despite a decline in their interest revenue.

“Credit finance companies’ spending on fund costs [to offer loan services] dropped significantly because of the low interest rate trend,” said an FSS official. “Their net income also rose as they sold off their bad loans.” In May, the Bank of Korea lowered its benchmark interest rate by 0.25 percentage points to 2.5 percent amid the sluggish domestic economy and slow recovery in the global economy, and kept the rate steady at its monetary policy meeting this month.

In addition, credit finance companies’ total assets also rose. The FSS data showed that, as of the end of June, their total assets were 85.4 trillion won, up 3.5 percent from the end of December. Their loan delinquency ratio also dropped 0.06 percentage points to 3.56 percent over the same period.

“The overall business conditions at credit finance companies were quite stable,” the official said. “However, there is a possibility that their spending on fundraising could rise in the future because there are lingering external uncertainties. There are also risk factors from rising household loans.”