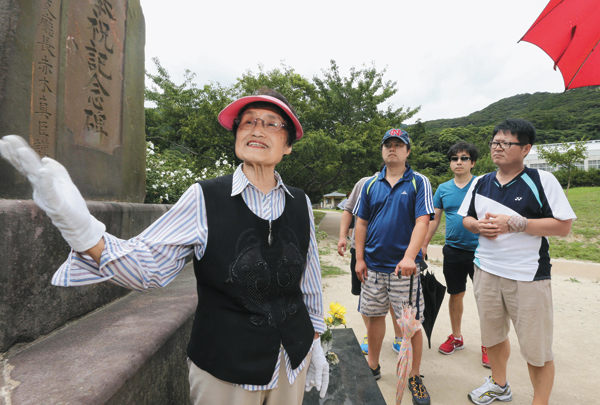 On the Japanese island of Tsushima, Song Yang-sun, an 85-year-old professional tour guide who specializes in tours of Japan, explains to Korean tourists the history of a monument erected in 1931 to commemorate the wedding of Princess Deokhye. By Song Bong-geun

She is the oldest active tour guide of the 20,000 registered with the Korea Tourism Organization. She was licensed by the Ministry of Land, Infrastructure and Transport in 1974 as a Japanese translator and guide and has been working for 40 years.

The daughter of a wealthy landowner in Nonsan, South Chungcheong, Song was born in 1928 and graduated from Gyeongseong Girl’s Education School in March, 1946. After graduation, she taught at a girls’ high school and then moved to Busan when she married. She was offered a job as a tour guide by an executive who came to the academy where she was teaching Japanese. She has worked for several noted Japanese politicians and flocks of ordinary tourists from both Korea and Japan.

Over the years, Song has shown the sights of Gyeongju to Japanese politicians such as former Prime Minister Morihiro Hosokawa and Tetsundo Iwakuni, once a leading Democratic Party member of the Diet of Japan. A tourist company in Seoul that organized the excursion for the two men asked Song to be their guide after hearing of her reputation. “How could you explain both Korea’s and Japan’s history so thoroughly?” Hosokawa exclaimed after her tour.

Japanese people who have toured with her once look for her again. The History Research Council from Japan, whose members are professional and amateur Japanese historians, ask for her to guide them to visit historical sites of the several Japanese invasions of Korea. They react with astonishment at her wide knowledge and enthusiasm.

Song has hundreds of thank-you letters in her house from Japanese tourists and was cited as an excellent Japanese-speaking guide in the June 2000 issue of the academic journal “Researching History,” published by the History Research Council in Japan. That admiration is reciprocal.

“How the Japanese History Research Council steadily studies Korean history is sometimes frightening,” Song said. “There should be many more Korean people who quietly study Japanese history instead of just being outraged at their atrocities.”

Song has also guided many Koreans visiting Japan. From 1995 to 2005 she led tours known as “Ship of a Busan Boy,” organized by a Korean newspaper. The tours were an effort to teach Korean youth about Korean and Japanese history and to give them a taste of traditional Japanese culture.

Just before Song returns to Korea after a tour in Japan, she goes to her regular bookstore at the port of Izuhara to buy a current-events magazine to understand the latest trends in Japan and use the information in her presentations.

She used to guide Koreans going to the main Japanese islands from Busan and Japanese tourists coming to Korea, but now she concentrates on tourists going to Tsushima from Busan by ship. While even some young guides get queasy on board, Song boasts of having never been seasick. She is strong enough, she continues, to climb to the top of the Eboshitake Observation Platform in Tsushima more quickly than most young tourists, and still stands as she discusses historical information while her bus rolls along. “I am fully alert, thinking that ‘tourists are gods,’” she said.

She arrives at the Busan International Passenger Terminal two-and-a-half hours before her ship is due to depart, reading a list of tour group members that indicates ages and jobs so she can tailor her presentation to them. After the trip, she calls her guests personally to ask about any inconvenience they experienced so she can fix it the next time.

She still favors that long-time emblem of Japanese tour groups: a flag to allow her brood to find her easily. These days, she complains, young tour guides make the tourists wear badges instead of using a flag because it is more convenient for them. She says she thinks they should use a flag, putting the tourists’ convenience before that of the guide.

She wore suits when she was young, she said, but now dresses a bit more casually. She scolds younger guides who arouse her ire with their garb or presentations; guides coming and going to Japan are afraid of “big sister,” she laughs.

“Guiding a tour group might seem easy, but it’s a job for a civilian diplomat,” Song said. “Foreign tourists judge a country’s cultural level according to the guide’s language and class. My dream is to die a few days after I’ve done my last tour group perfectly. Then I can be a guide in heaven.”

She has two other mottos, “When you are lazy there will be misfortune and when you are busy there will be luck,” and “Live up to your reputation.” Like an actor whose wish is to die on stage, Song says she’s going to guide tourists as long as she is able to live up to those standards.