Ex-pro helps youth strike out from life on the street

Ex-pro helps youth strike out from life on the street 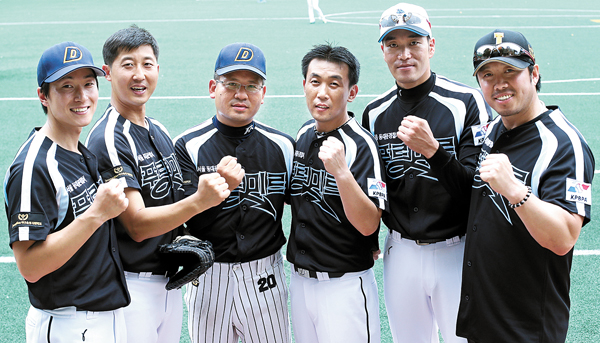 At a baseball stadium in Seoul, former pro player Choi Ik-seong, right, poses with police and athletes who helped him organize a baseball training program for boys at risk of tangling with the criminal justice system. By Park Jong-geun

Choi Ik-seong, who played in the Korea Baseball Organization from 1994-2005, organized an ongoing baseball camp in June in cooperation with the Dongdaemun Police Precinct, in an effort to help juvenile delinquents find new lives.

This is the first time a former pro player has run such a community project, which includes counseling for youth in addition to advice on how to hit a curve ball.

During his 11-year baseball career, Choi was a journeyman player who probably always kept a suitcase packed. He started out with the Samsung Lions in 1994 and also played with five other teams, retiring in 2005 after a stint with the SK Wyverns. He moved to the United States after that and tried to revive his career there but was not picked up. So he returned to Seoul and opened a rehabilitation center for retired and active ball players who had fallen on hard times.

Choi happily accepted Dongdaemun police station’s proposal to organize a baseball program for teens roaming the streets. He invited his colleague Park Joon-soo, who played at Kia Tigers until 2011, to join in the project. Park accepted quickly.

Yim Jeong-seob, the chief of the police station, said he hopes the project will become a long-term, settled program. At the moment, it is more of an instructional camp than a league because it has only a single team.

“We set up this program on an annual basis to help juvenile delinquents restore their self-esteem and feel a sense of achievement,” Yim said.

Currently, 23 middle school students in the neighborhood are members of the baseball team. Some joined because they love baseball, but many with criminal records were directed to the project as an alternative to being dragged into the criminal justice system. Several are on probation after misdemeanor convictions for burglary or other crimes; others are under police protection as victims of domestic violence.

The youth went on a two-day training trip to Chuncheon, Gangwon, earlier this month and had a total of 10 practice sessions. Some adults in their lives say they see some signs of change in them already.

“Since he started baseball, my son has become a person who knows how to put out an effort,” said Hwang Byeong-yeol, one boy’s father. “He tries to keep his promises, and he’s stopped wandering around late at night.”

“Adults must provide kids with something they find interesting,” said Ryu Mee, a psychologist who works with the group. “Drug addicts such as glue sniffers need something else to take an interest in.”

Choi added, “We shouldn’t see these kids as problems. We should learn how they see society.”