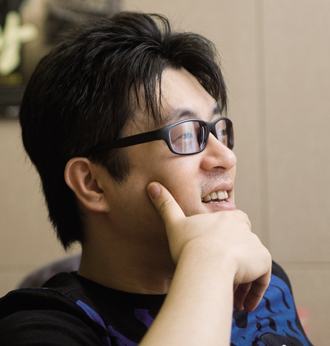 Park Sang-yeon, the scriptwriter of the 2007 film “Joint Security Area,” is also an opera lover. He says, “To listen to songs by La Scala artists, who are not often seen in South Korea, is a privilege.” Provided by the organizer

Thirteen years ago, a South Korean mystery-thriller film won the critics over and drew half a million viewers in its first week at theaters.

That film, “Joint Security Area,” will be turned into an opera this month to commemorate the 60th anniversary of the armistice that ended the 1950-53 Korean War.

“Joint Security Area” is a fictional account of an incident at the DMZ, a fatal shooting in the zone that left two North Korean soldiers dead, and the subsequent investigation of the matter. The movie is based on a novel, “DMZ,” written by Park Sang-yeon, who also wrote the screenplay for the movie.

Park, 41, says a renowned writer of Korean literature, Lee Moon-yeol, once told him, “A writer always competes with his previous work.”

Putting that aphorism into practice, he is pitting the film and his previous work, “Deep Rooted Tree,” a historical drama that aired in 2011, against each other to see which will come out on top.

“Opera JSA” will run Sept. 27 to 29 at Ilsan’s Aram Opera House. Artists from the world-renowned La Scala opera theater will be in the cast. The JoongAng Ilbo sat down with the versatile and prolific writer to talk about the upcoming work.

Q. I understand that the theme of “Opera JSA” is different from that of the movie?

A. The movie’s theme was a tragedy about peace, which can only be maintained by hiding the truth. Since the theme was fresh and the movie’s execution was highly skilled, the audience loved it. But that was different from the novel’s theme, which was 50 years of “operant conditioning,” a type of learning where an individual’s behavior is modified by its consequences. The opera that will be performed this month will follow the novel’s theme.

I can’t really say because I did not write the opera script myself. But the past of the Swiss army major, played by Lee Young Ae, will be emphasized. This was left out of the movie. The major’s father had been a prisoner in Geoje Island prison for 53 years. He was a POW who chose neither the South nor the North, but a third country instead. The story of this family will be important in the opera, and as a writer, I’m excited about it.

I’m impressed by your efforts at different things. What’s your motivation?

I think I was lucky to have written for novels, movies, and TV soap operas. I feel the pressure too. In soap operas, you have to deliver a story in a way that doesn’t follow common sense. I don’t have to worry very much about motivation. The fact that 200 staff members, producers and actors are waiting for my script through thick and thin is my motivation.

What do you want the audience to take from “Opera JSA”?

The movie drew 6 million viewers to theaters. Others will have seen the movie in other forms. I hope operagoers experience through the opera’s themes some special meanings they did not see in the movie.