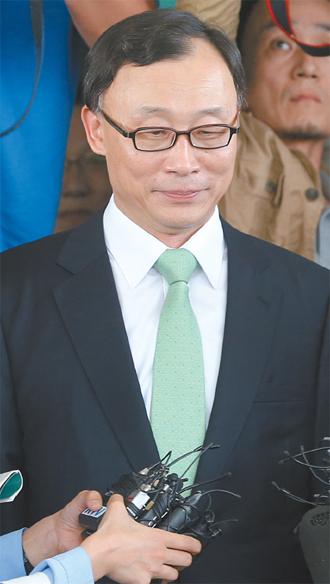 Prosecutor-General Chae Dong-wook talks to reporters yesterday at the Supreme Prosecutors’ Office after he tendered his resignation. [NEWS1]

Prosecutor-General Chae Dong-wook yesterday tendered his resignation an hour after the Ministry of Justice announced an unprecedented probe into the nation’s top prosecutor over allegations he has a love child from an extramarital affair.

But Chae continued to insist that the allegations he had an out-of-wedlock son were “groundless suspicions” and apologized to the public for not completing his two-year term.

“I once again assure that all the reports on my personal life published by a certain media company are not true,” he said in a statement released by the Ministry of Justice yesterday. “I hope in the future there will be no more groundless suspicions to hinder a government official from performing his duty and following his conscience.”

Chae said he pursued all cases based on the law and regardless of any political interests.

“In the past five months [since I took office] I dare to say that I have led the prosecution in a right direction based on the law and principles alone,” he added.

Last week, the Chosun Ilbo reported that the 54-year-old prosecution chief had a 10-year-old son from an extramarital affair in July 2002. In a second article, it claimed that the boy’s school records listed his father as Chae Dong-wook.

On Thursday, Chae fired back by saying he would sue the newspaper unless it published a correction. He denied the allegation and said he was willing to take a DNA test.

His resignation came just an hour after Justice Minister Hwang Kyo-an announced an unprecedented probe into the incumbent prosecutor-general to get to the bottom of the allegation.

“The continuous controversy over the ethics of a person in charge of the nation’s top investigation organization could have a serious impact on public trust of the prosecution,” Hwang was quoted as saying by his spokesman, Cho Sang-chul. “Accordingly, we should bring all controversy to a close by investigating the truth as soon as possible,” he said.

Hwang appointed an independent investigator who is not controlled by the prosecutor-general, according to the Justice Ministry.

Under internal regulations of the Justice Ministry, it can launch an internal probe into a senior prosecutor if he or she is involved in a case in which the justice minister judges the prosecution would be neutral about.

Handpicked by President Park Geun-hye, Chae had a squeaky-clean reputation and had been involved in high-profile cases involving political bigwigs. Democratic Party believed Chae was forced to resign because of his handling of an ongoing investigation into the National Intelligence Service’s alleged smear campaign against the opposition candidate in the 2012 presidential election.

“The DP focuses on the fact that some ruling party members have been calling to replace the prosecutor-general since he indicted two key persons in the NIS smear campaign: [former NIS chief] Won Sei-hoon and [former Seoul police chief] Kim Yong-pan,” Bae Jae-jeung, a spokeswoman of the DP, said at a briefing. “In fact, Saenuri Party members strongly criticized the indictments at the recent National Assembly investigation into the case.”

Bae said his resignation would cast a shadow on the upcoming three-way meeting between the president and the leaders of the ruling and main opposition parties on Monday. The DP wants that meeting to concentrate on the NIS investigation. “It is regrettable that this incident happened at such a delicate time,” Bae said.

“This is ostensibly a resignation, but in fact it’s political persecution,” a DP lawmaker told the JoongAng Ilbo. “He must have been forced to resign. This is like the Watergate scandal.”

In June, the prosecution indicted Won and Kim without detention on charges of violating the election law. The ruling Saenuri Party formally protested the indictments and said it suspected the prosecution manipulated evidence. Chae denied the allegation.

While Chae was combating reports about his alleged love child, the prosecution was accelerating its investigation of the NIS scandal.

“It is a groundless suspicion that the NIS and the Blue House leaked the allegation [to the Chosun Ilbo],” the lawmaker told the JoongAng Ilbo.