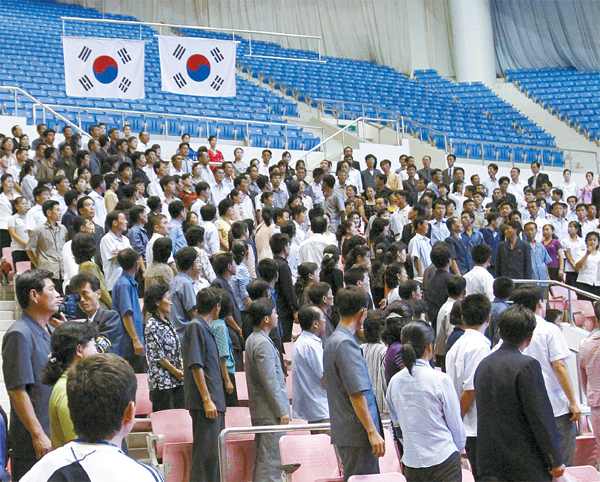 South Korean flags are raised over North Korean spectators after South Korea won gold and silver medals at the 2013 Asian Cup and Interclub Weightlifting Championships in Pyongyang on Saturday. [AP/NEWSIS]

North Koreans observed the playing of the South Korean national anthem in Pyongyang on Saturday, the first such occurrence on their own soil, after a South Korean teenager won a gold medal at the 2013 Asian Cup and Interclub Weightlifting Championship.

According to the North’s official Korean Central News Agency, Kim Woo-sik, 19, won the men’s 85-kilogram (187-pound) competition at the championship. His fellow South Korean, Lee Young-gyun, won a silver medal. The two were the only athletes competing in the category.

Kim was initially scheduled to compete in the 77-kilogram division, but according to South Korea’s Sports Kyunghyang, the South Korean coaches were known to have decided to let him compete in the 85-kilogram division, considering the rules regarding an international weight lifting competition, which honors the winner of a division with a regular medal award ceremony only when there are at least two athletes competing in it.

The Korea Weightlifting Federation, South Korea’s governing body of the sport, had given no update of the event since it released a statement of South Korean athletes entering training in Pyeongyang before the opening ceremony on Wednesday. It said it is getting news of the South Korean delegation from a Chinese news agency, delayed by one or two days.

North Korean state television KRT showed North Korean spectators standing, apparently to show respect, while the South Korean anthem was played and the South Korean flag was raised during a medal award ceremony at Pyongyang Indoor Stadium. The aegukga and the taegeukgi have never been played or exhibited openly at a sports event held in the North, with the North sensitive to the issue of the methods and terms with which it refers to its neighbor to the south. The two Koreas are technically at war as the 1950-53 Korean War ended in a truce, not in a peace treaty.

In 2008, the North refused to see the South Korean flag during a qualifying match for the 2008 South Africa World Cup, which was scheduled to be held in Pyongyang, but later was moved to Shanghai.

At the London Olympics last year, the North protested the mistaken showing of the South Korean flag on an electronic board when the North Korean women’s football team was introduced during a group stage match against Colombia, causing the match to be suspended temporarily before the North accepted an apology by the organizing committee of the Games.

The North, however, said that it will allow the exhibition and the play of the South Korean flag and the anthem after it invited South Korea to the weight lifting championship, an annual competition it is hosting for the first time. Last week, the two Koreas agreed to resume business at the inter-Korean Kaesong Industrial Complex beginning today.

Kwon Ye-bin became the first South Korean athlete to have the taegeukgi raised after she won a bronze medal at the women’s 69-kilogram final on Friday. Then, Lee Jae-gwang won a silver medal in the men’s 94-kilogram division on Saturday.

The four are the only weight lifters competing at the junior level from the 41-member South Korean group, which includes 22 athletes. Eighteen others, including six women, began to compete at the senior competition, which started yesterday.

About 15 Asian countries and 200 athletes are competing in the event, including China, Kazakhstan, Syria, Uzbekistan, Thailand and Mongolia. It will run through tomorrow, with the closing ceremony scheduled to be held late tomorrow.