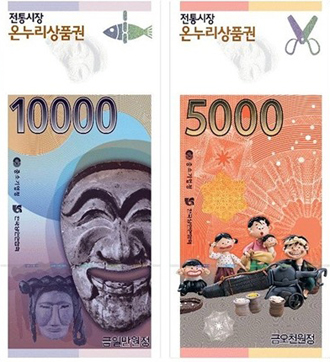 It has been five years since the government created onnuri vouchers with an aim to boost sales at traditional markets and revive regional economies, but there are not many consumers who are willing to buy them voluntarily.

With the Chuseok holiday falling this week, there is a fresh controversy that the government is forcing conglomerates and public institutions to buy the vouchers.?

A 35-year-old female assistant manager surnamed Nah at one of conglomerates grumbled about a 100,000 won ($92.05) onnuri gift card she received last week from her company.?

“I understand the good purpose of giving out the onnuri vouchers, but it is quite inconvenient for me to use the card since I only shop at large retailers,” Nah said.

Merchants can convert the vouchers they receive into cash at commercial banks. They welcome the government’s effort to encourage more consumers to use the vouchers, but in reality consumers don’t find the vouchers effective or convenient.

“My company used to dole out gas pump vouchers until before last year, which was actually a great gift amid high gasoline prices,” said a 40-year-old senior manager surnamed Kim at a manufacturing giant. “I think large companies are reluctantly purchasing the vouchers, being increasingly cautious of anti-conglomerate social sentiments and the economic democratization initiative.”

The government has set its target sales of the onnuri vouchers at 500 billion won by the end of the year, but the current sales are about to reach 120 billion won. Therefore, it now aims to sell 250 billion won worth of vouchers before Chuseok. This has caused employees at many private and public corporations to complain about “being forced to go to traditional markets by the government.”

“It is true that the number of consumers with onnuri vouchers spike at national holidays like Chuseok,” said Jin Byeong-ho, chairman of the Seoul Metropolitan Governance Merchant Association.

But some say consumers aren’t shopping at the stores willingly; instead, they feel pressured to do so by the government.

About 50 percent of the sold vouchers were purchased by large private businesses and public institutions, according to the ministry’s data. 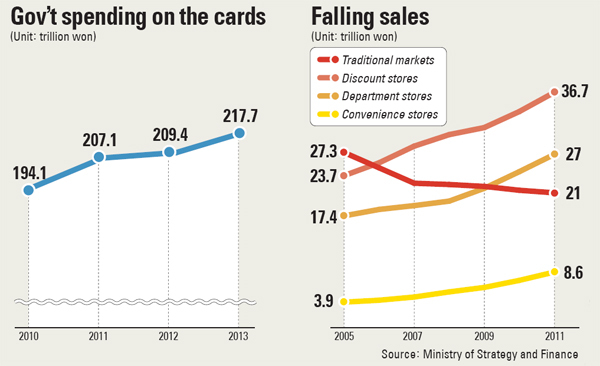 Conglomerates bought 333.3 billion won worth of vouchers, accounting for 39 percent of the aggregate sales. Samsung, the nation’s largest business mogul, bought 100 billion worth of vouchers last year. Insiders of major private companies say their firms are struggling to improve their public images by buying vouchers to meet social expectations in terms of economic democratization, co-prosperity and mutual growth.

“The government might think companies are voluntarily buying the vouchers, but that’s not true,” a senior executive at a conglomerate told the JoongAng Ilbo. “At a time of growing government pressures on large businesses, we have no choice but to comply with every piece of government policies in order to possibly avoid further restrictions.”