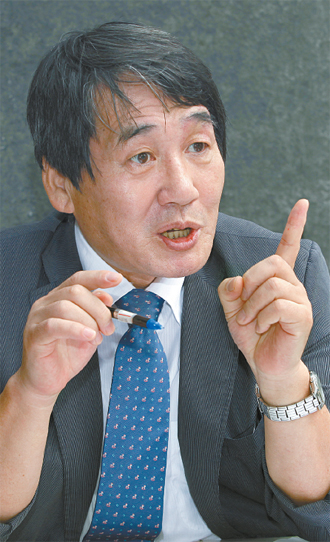 Chang Jung-ouk, a professor at Matsuyama University in Japan, and a known critic of nuclear energy, condemns the Korean government for doing little to protect its people against radiation from Japan’s stricken nuclear power plant.

In a recent interview with the Korea JoongAng Daily, the 58-year-old Korean national who has been living in Japan since 1987 said, “It seems to me the Korean government is lying.”

Chang’s stance is that the government should never say that it’s safe to consume fish with any radiation contamination. “It should measure radiation levels accurately and reveal the numbers to the public,” he said, “and give consumers the right to choose whether to consume the fish or not.”

While the Korean government is largely concerned with cesium levels in consumer products, Chang said there are two other nuclear elements that are detrimental to human health: strontium and tritium. Koreans are less aware of those elements because the government has been hiding their importance.

“No one knows the true consequences of this radiation leakage,” the professor said. “The Japanese government will have to deal with it for the next four decades at least. And the Korean government shouldn’t mislead the people with its stopgap measures.”

Q. Do you think the Korean government’s recent ban of all fisheries imports from eight prefectures including Fukushima is enough?

A. Not at all. The government should ban imports of fishery products from 10 prefectures at least. Tokyo and Hokkaido should be included. Tokyo is reported to have high radioactive levels, and it is so close to Chiba, one of the eight banned regions. Hokkaido is only 10 kilometers (6.2 miles) north of Aomori, one of the prefectures under the government watch. When fishermen catch fish in Aomori Prefecture and trade them in Hokkaido, that means Korea could import fish from Aomori disguised as being from Hokkaido.

What is the Korean government’s biggest blunder in coping with the Japanese radiation?

The government is not measuring strontium and tritium that are two critical elements of radiation. Majority of radioactive elements leaking from Fukushima is strontium, not cesium. It flows into the ocean and accumulates in fish bones. When we eat those fish and have strontium build up in our body, the element will affect bone marrow, leading to leukemia. The Korean government only uses devices that measure cesium currently. Separate devices are needed for strontium, and it also takes more time to measure it. I don’t know why the Korean government isn’t measuring strontium levels. Maybe it forgets about strontium in fish, since the measuring takes about three weeks and the fish go bad.

The government also believes tritium isn’t harmful to the human body if the amount taken is less than 1 millisievert a year. That misleads people and there have been some public worries about tritium found in areas nearby the Wolseong-1 nuclear power plant in Gyeongju, North Gyeongsang.

The Korea government keeps saying it is okay to consume fish distributed in the domestic market, but sales are falling. Is it okay to continue eating fish?

The Korean government should make a change in its unilateral way of doing PR about the safety of fish consumption. It shouldn’t try to convince people by using the word “safe.” Russian fish are not as safe as the government says. Measure the contaminated accurately and reveal the numbers to the public. You can’t say it is safe because the radioactive level is under 100. It’s been over two years since the nuclear plant meltdown, and radioactive materials are carried by fish all over the world. Big fish like tuna and cod are already contaminated. Children and pregnant women shouldn’t be eating that fish.

Will Japan resolve the leak?

Since the Fukushima Daiichi nuclear power plant exploded in March 2011, this is the first time that the Japanese government decided to take action to deal with the issue. The former Democratic Party-led government accused Tokyo Electric Power Corporation of the accident and didn’t do anything. Now, the Liberal Democratic Party-led administration has stepped in. It even pledged to pour as much as 47 billion yen ($471.3 million) into building a 32 billion yen ice wall around the leaking nuclear power plant and a 15 billion yen advanced liquid processing system known as ALPS. Koreans may not know it, but the ice wall is nothing new. The Japanese government has already been building two smaller walls on a nearby beach. The whole point of constructing the walls is to contain contaminated waters inside the space surrounded by the walls. The difference between the smaller walls and new ice wall is that cooling materials will be injected into the contaminated soil to freeze it and stop anything flowing out. But it is the first time in history that a 0.9 mile-long ice wall will be built. There was one time that a U.S. research institute used the method in the 1950s, but the wall was not that long. Whether the ice wall can fully block the water remains to be seen. According to the construction industry, blocking water in this way may not be successful because there will be new waterways inevitably created.

No way. Nothing will change in seven years. The most fundamental task is to find holes where the radioactive water is coming out from the three plants. The government plans to open the currently closed plants from 2020. There are still risks of another explosion.