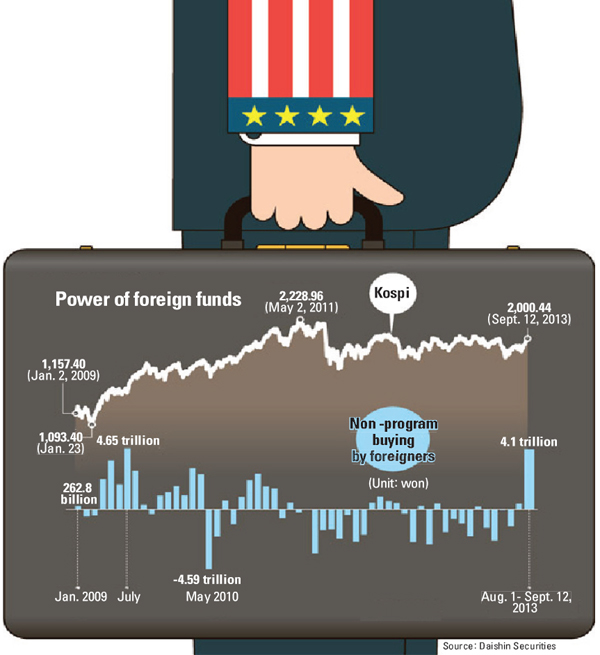 Despite lingering uncertainties in global financial markets, Korean stocks have performed well recently, topping the 2,000 point mark for several days last week for the first time in more than three months. The main cause is strong foreign buying, as international investors see the Korean economy recovering.

As of Friday, the local stock market closed 0.49 percent lower than the previous day, finishing at 1,994.32. Despite the slight fall, however, foreign investors once again were big buyers, for the 16th consecutive trading day.

As foreign investors have been pulling out of emerging markets around the world since mid-August, many of them have been turning to Korea.

In August, foreign investors purchased 2.1 trillion won ($1.93 billion) worth of local shares, while in the first nine trading days of September they bought another 4.3 trillion won worth.

However, market analysts say that the purchasing pattern of foreign investors is different from in the past.

Analysts also point out that the form of stock trading is different, with most foreign buying coming from non-program trading. Nonprogram buying is often more of a long-term investment, so investors tend to be less concerned about short-term fluctuations.

Market analysts say that, based on recent trading patterns in the stock market, the outlook for the Kospi is optimistic.

“Looking back, foreign investors bought local shares through nonprogram trading when there were signs of economic recovery,” said Oh Seung-hoon, a researcher at Daishin Securities. “Shares bought through program trading, on the other hand, happened regardless of economic conditions.”

Oh Hyun-seok, an official from Samsung Securities, also noted that foreign investors have increasingly been expressing interest in the local stock market.

“Earlier this year, we held a conference in New York sharing portfolios of Korean companies, but not that many foreigners participated,” Oh said. “At a conference we recently held, however, many foreigners showed up and there were no empty seats. Their attention on the Korean market has certainly increased.”

But some analysts say that it is too early to be optimistic about foreign investors’ attitudes toward the Korean securities market.

“It remains to be seen whether the foreigners’ buying spree can be seen in the market as betting on an optimistic outlook of the Korean economy or simply a short-term investment plan,” said Shim Sang-beom, a researcher at Daewoo Securities.

In the meantime, the focus is now on how much more foreigners will invest in local stocks.

In 2009, there was an inflow of 26 trillion won worth of foreign capital into the securities market. Considering that so far this year a total of 6 trillion won has flowed in, analysts say there is room for much more.

There are concerns, though, over the uncertainty in the global financial market, which can affect foreign investors’ bets. More details are expected to be announced by the U.S. Federal Reserve this week on its plan to cut back its bond-purchasing program, known as quantitative easing. Also, the business outlook of local companies, including Samsung Electronics, isn’t that bright, which could make foreign investors turn their backs on the local market.

“It seems the foreign capital flowing into Korea is mainly those that have been pulled out of emerging countries in Southeast Asia,” said Oh from Samsung Securities. “They seem to be investing in safer markets like Korea and Taiwan.”