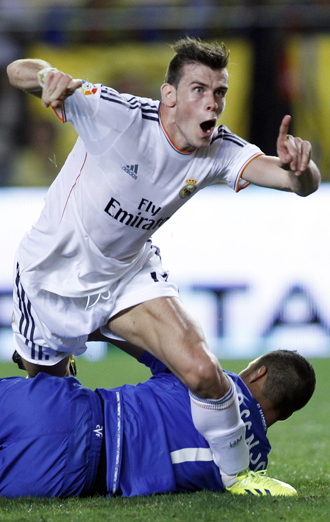 BARCELONA, Spain - Gareth Bale had a bittersweet debut for Real Madrid after his world-record transfer fee, as he scored but his new team drew, 2-2, at Villarreal on Saturday.

The draw left Barcelona and Atletico Madrid as the only perfect teams through four rounds in the Spanish league after their wins.

Barcelona needed an injury-time goal by Alexis Sanchez to edge Sevilla, 3-2, after conceding two late goals at home, while Atletico rolled to a 4-2 win over Almeria.

“That last goal was all heart,” Alexis said.

Other than Bale’s goal in the 38th minute, Madrid was outplayed in the first half and only Diego Lopez’s goalkeeping kept it 1-1 by halftime after Ruben “Cani” Garcia beat him in the 21st.

Madrid’s Cristiano Ronaldo hit off the break two minutes after an exhausted Bale was substituted in the 62nd, but Cani’s hard strike led to Giovani Dos Santos netting the rebound to split the points in the 70th.

Madrid will have to regroup in time for Tuesday’s Champions League opener at Galatasaray.

Madrid broke its own transfer milestone for Ronaldo by paying Tottenham 100 million euros ($132 million) to acquire Bale at the close of the summer transfer window.

Even though Bale had played only a few minutes this season in a match with Wales last week, he responded to the start coach Carlo Ancelotti gave him by equalizing to silent Villarreal’s rabid attack.

“I think Bale is happy for having scored in his first game with Madrid,” Ancelotti said. “He played in a game that was difficult for everybody. He showed a good attitude on the pitch.”

All eyes at El Madrigal Stadium may have been on Bale, but Villarreal’s starting 11 were the only players shining early as its forwards’ blistering pace had Madrid on their heels.

Lopez, the former Villarreal goalie, could do nothing to keep out Cani’s shot when he scooped in a ball lost by Jonathan Pereira.

Bale turned the match in Madrid’s favor when he slipped inside his marker and met Daniel Carvajal’s low cross, tapping the ball over the line before goalkeeper Sergio Asenjo could arrive.

Ancelotti took off Bale and new midfielder Asier Illarramendi, who also debuted for Madrid, with Bale looking as winded as expected considering his lack of playing time.

Ronaldo enjoyed a lucky bounce to score when his hard shot hit off a defender and then ricocheted off the Portugal forward’s own shin and into the net.

Villarreal didn’t wilt, however, and Dos Santos drove the ball beyond Lopez after he parried a long strike by Cani.

“We were close to the win but a draw against a team like Madrid is good,” said Cani, whose Villarreal had won its first three games as well. “Even so, we are left with that nagging feeling that it’s not every day you have a chance to beat Madrid.”