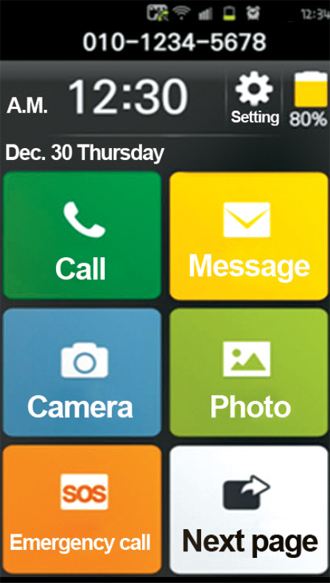 The new main page that will be set up on smartphones exclusive for elders. The icons are much larger than the ones available on other smartphones. Provided by the ministry

A woman in her late 60s carries a plain-vanilla cell phone; she grumbles that she doesn’t see the point of using a smartphone because she can’t understand most of the applications on the screen.

“All the phone needs to do is make calls and send and receive text messages,” said the woman, who allowed only her last name, Chung, to be used.

Her husband uses a Samsung Galaxy phone, she continued, but she only sees him listening to music or watching the news. Smartphones blend voice call and text message functions with an Internet connection that allows a dazzling array of services to be offered by small programs popularly known as “apps.”

Chung said the first thing she noticed about the inconvenience of smartphones is the small icons for the apps.

“People about my age have trouble seeing, especially with icons of that size,” she said. “Also, when I look at the screens, there are too many icons plastered all over, which just looks too complicated.”

The government, in cooperation with the nation’s major telecommunication companies, SK Telecom, KT and LG U+, has stepped in to offer smartphone services and billing systems customized for older people and young children.

The Ministry of Science, ICT and Future Planning said yesterday that the new phones will have redesigned main screens for use by people bewildered by the usual layout of smartphones. Icons will be simplified and enlarged. When the phone is turned on, the user will see apps that older people use most frequently, such as phone calling, a camera, emergency calls and direct media broadcasts.

One safety feature is that the emergency call function can be set up so that the phone will automatically call the numbers of people designated as family or close friends if the owner of the phone does not use it at all for either 12 or 24 hours.

The sensitivity of the phone’s touch screen has been toned down because older people have a tendency to press down on an icon on the phone much longer than younger users do.

The telecom companies will also cut the service charge for using the phone from 10 percent to 30 percent for calls to selected family members and friends, and will increase the quota of data service in the basic bill.

An app that allows parents to track down their children will also be available, as will settings that can help parents manage their child’s use of the device. Parents will be able to view a log of the apps and Web sites that the child has used, as well as the total time the phone has been used.

Such services will be included among the apps that come with the phone when it is sold; they are free rather than paid apps.

SK Telecom is expected to be the first to offer the service, starting later this month, while KT and LG U+ will probably offer similar services in November.