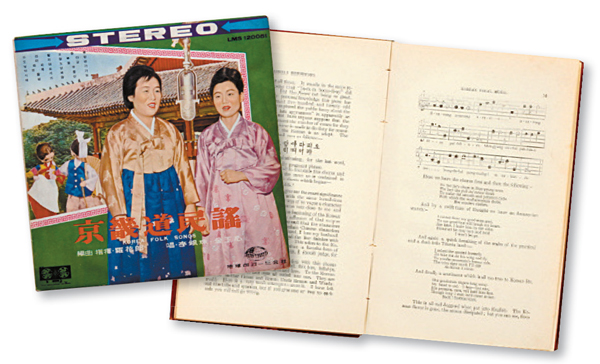 The song was “Arirang,” a traditional Korean folk song whose origin is unknown, but is like a second national anthem to Koreans.

She made a recording of it on an Edison wax cylinder, but although it is the oldest known recording of “Arirang” sung by Koreans, the cylinder just gathered dust in the U.S. Library of Congress for more than 100 years.

Only in 1998 did Robert Provine - an emeritus professor in the School of Music at the University of Maryland - reveal the existence of the recording at a conference on gugak, or Korean traditional music, held in Korea.

Now there is a chance to see the recording as well as other artifacts related to “Arirang.” The National Gugak Center in Seocho-dong, southern Seoul, is holding an exhibition titled “Song of Korea, Song of the World Arirang.”

“We are showcasing some 75 artifacts that show the musical elements of ‘Arirang,’ as well as those that belonged to master artisans and singers who transcendentalized ‘Arirang’ into a form of art,” said Lee Seung-jae, the center’s public relations official.

Among highlights is a 1913 record of “Arirang” that is the oldest version known in Korea and a 1916 version sung by a German POW.

Arirang was added to Unesco’s Intangible Cultural Heritage list in December of last year. Experts say there are at least 60 versions of “Arirang” across the Korean Peninsula. The reason the song has lasted so long and has been able to evolve is because it is so versatile: It can be a love song, labor march or campaign anthem.

To mark the occasion, a host of cultural events about the beloved song are being held around the country this year.