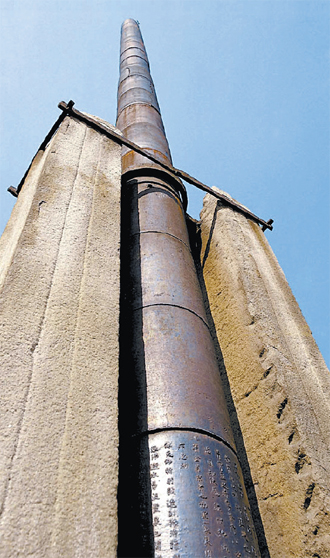 When there is an event in a temple, a flag called dang is hung at the entrance.

Two posts support the flagpole, which stands in Nammul-ro, Sangdang District in Cheongju, where Yongjusa Temple used to be.

The road where the flagpole stands is now the busiest in Cheongju.

However, the flagpole remains as it used to be with the supporting stone and two posts.

However, the temple was shut because of frequent warfare during the late Goryeo period.

The flagpole is considered to be a precious relic because its date of origin can be confirmed.

Flagpoles remain rare in Korea and can be found in only three places: Gabsa Temple in Gongju, Chiljangsa Temple in Anseong and here.