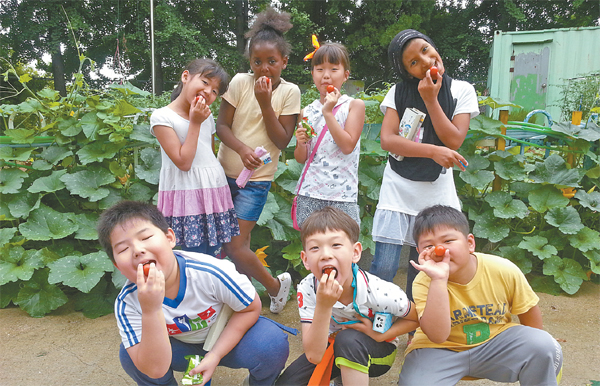 Although the actual numbers may not warrant the designation quite yet, the Ministry of Education says Korea has stepped into an era of a multi-cultural society with 50,000 students of foreign or mixed ancestry. The figure is about six times higher than when the first such statistics were gathered in 2006. Those 50,000 students still number a bit less than the 0.9 percent of all students in Korea, but the ministry predicted that with the steady increase over time, the 1 percent benchmark will soon be reached.

And the government has been thinking about how to integrate these students into Korean society. In March 2012, it produced a document called “Plans to Enhance Multi-cultural Education.” Those plans revolve around the creation of preparatory schools within regular schools for students from non-Korean backgrounds. Those academies, which will eventually be set up around the country, number 52 at the moment. Their purpose is to act as a buffer, teaching children Korean language and culture before they dive into the regular school curriculum. (In Korean, the literal translation of “multi-cultural” is used for immigrants and long-term residents, even though many are the offspring of parents of a single, non-Korean culture.)

Wongok Elementary school in Ansan, Gyeonggi, is one of the best examples of the multi-cultural environment the government wants to foster. The school has the highest percentage of immigrant students in Korea - 230 of the 403 pupils there are foreign-born. Their nationalities are diverse; their parents come from China, Uzbekistan, the Philippines, Vietnam, Uganda, Kazakhstan, Nepal, Russia, Indonesia, Japan, Thailand, Bangladesh, Pakistan and the Republic of Congo. Students from China account for nearly two-thirds of the foreign cadre at the school; Wongok-dong has a large number of Chinese families within its boundaries.

“It was horrible at first,” said Andrey Lee, who came to Korea from Uzbekistan in March. “I was so happy while I ate lunch because it was getting closer to the time for me to go home.”

Lee now understands simple Korean and participates in a soccer class every Tuesday and Thursday. Unlike what he thought three months ago, he says he now comes to school early because he enjoys the atmosphere at school.

Kochomphu Phunwasa, who came from Thailand, is in the third grade. He attends an onnuri (global) class instead of regular classes during the first and second periods every day. The class is for students who are still weak in Korean; they study with other classmates when subjects such as physical education, music or arts are relatively easy to follow. These special classes help foreign students with more language-intensive subjects like Korean studies or social studies.

The foreign students work on a timetable different from that of Korean students, a practice that is similar to those used by other countries who are working to absorb immigrant populations. Wongok Elementary school conducts three such onnuri classes, made up of 15 students each, classified by age and language ability.

Phunwasa, who could only say simple Korean words six months ago, has improved his Korean to the point that he can tell his friends what he did on the weekend.

“I had galbi last Sunday,” he reported. “I like having Korean food more and more.”

Foreign students who immigrate here not knowing a word of the language can usually speak fluent Korean after a year. When Wongok Elementary first created these special classes in 2009, they had the students stay in class as long as possible so the students could get used to their school life quickly. But now, the school is encouraging students to leave that onnuri nest as soon as possible so they can associate more with Korean students and assimilate.

Sometimes it is difficult for teachers because so many cultures are intertwined. School lunches were the first problem they faced among the 15 cultures represented there. Students from Islamic cultures do not eat pork; many Indian students are forbidden to eat beef. A student from Bangladesh went to her sister’s table at lunch time to make sure she didn’t eat the pork dish that was on that day’s menu. For such reasons, the school began preparing substitute side dishes for students facing such problems. And religious rules are not the only problem; some students from land-locked and arid Mongolia had never eaten fish. 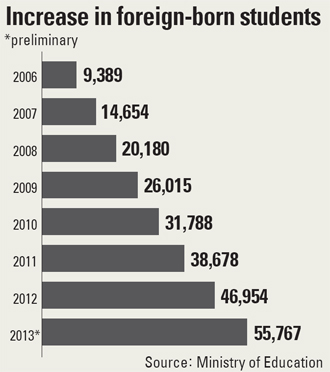 When it is time to teach Korean history in social studies classes, things are also sometimes awkward.

Since there are many Chinese students, sports contests are an area where loyalties may be divided, but many such students have reacted with the pragmatism. When Korean and Chinese national teams play each other, some root for the Chinese side in the first half and the Korean side thereafter.

Discussions of lingering Korean xenophobia have to be handled delicately also. When foreign students see passages in textbooks about the discrimination that foreign laborers sometimes face here, the teachers try to help the students overcome their shock or displeasure by handling the matter in a straightforward manner.

But difficult situations are not the norm in the classrooms. Foreign students hang out with their Korean counterparts and quickly get familiar with the class atmosphere regardless of their nationality. Students are often seen helping their peers, and teachers say that Korean children are learning quite a bit as well about harmonious relationships.

“Students learn a lot by living with students from other cultures, thinking about how to talk to them and maybe even getting interested in foreign languages,” said Son So-yeon, a teacher of the onnuri classes.

A sports day is held every May 1 at this school and has an important multi-cultural educational impact on the students. In the opening ceremony, students hold 16 national flags in the middle of the field. They are not merely holding the flags of their parents’ homelands but are representing the reality of the school.

Daniel, a student from Congo, stood on the field holding that country’s national flag.

“Congo is my mother’s homeland, not mine,” he said offhandedly.

Some girls wear a hijab when running in a race. Teachers ran a booth that translated parents’ names from their native languages into Korean script, and at another, they handed out snacks from all over the world to students.

Wongok Elementary School has taken care to emphasize to their immigrant students the importance of also mastering their mother language, a step that can pay big dividends for them in the future.

“It is an advantage for the students if they can speak another language fluently if they want to become a diplomat or work abroad for a company,” said Lim Byeong-taek, the principal of Wongok Elementary School.

The school can, in some cases, make arrangements for such study during regular class hours, and teachers recommend to parents that they speak their native language at home.

“Because we have set up good systems for foreign students, many more want to transfer to our school,” Lim said.

But despite all those efforts, discrimination persists. Nationally, the National Human Rights Commission says, more than 40 percent of foreign students say they have been mocked about their Korean pronunciation; more than a third say they had been shunned and a quarter mocked for their nationality or skin color. Teachers at Wongok also worry about social prejudice and stereotypes about their wards. Doubts about any foreigner’s ability to adapt to Korean school life are still common, as are worries about whether they can excel academically. Teachers say some students do indeed have trouble absorbing what they are learning, but stand-out students are not uncommon either.

A student from China had a perfect score in every subject last semester. Min-jung Kim, born of a Chinese mother and Korean father, is one of Wongok’s outstanding scholars and moves easily among her friends of all national origins. She says she counts Yu Ji-min, Choi Su-jin and Song Hye-min as her best friends; Song’s mother is also Chinese; Yu and Choi are native Koreans.

“We’re all Koreans,” the four agreed.

There was also an election slogan about the school’s population of foreign students. During the election for student body vice president, one candidate’s main slogan was, “The candidate who helps multi-cultural students.”

The occasional dispute arises, of course. One foreign student once said adamantly, “I don’t have to serve in the military.” But teachers say such things are a function of age and not background, and are usually easily handled.

Students having great difficulties adjusting to Korean life are checked for psychological problems. Some foreign students arrived here unexpectedly, to them, because of a parent’s remarriage.

“Some students are confused because they face a new and different society and a different family,” said Jeong-ran Kang, a teacher at Wongok.

“There should be a resident counselor to listen to students when they have a problem,” said Park Mun-ju, the school’s head teacher.

Jang In-sil, head of Korean multi-culture education at Gyeongin University of Education, agreed with those sentiments.

“We should increase the number of teachers of Korean as a second language and also create an environment for the Korean students to get used to other cultures,” she said. “We should support the students’ strengths to become bilingual, so that they can also play an important role as global students.”