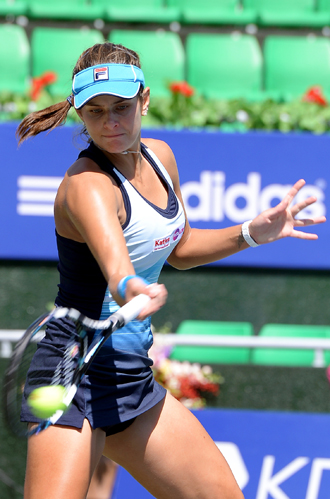 Julia Goerges of Germany returns a shot to Misaki Doi of Japan during the first round of the KDB Korea Open at Olympic Park in Seoul, yesterday. Goerges won, 6-3, 7-5. [NEWS1]

The KDB Korea Open, the only international tennis competition held in Korea, kicked off its 10th edition with first-round matches at Olympic Park in Seoul yesterday.

About 30 of the world’s top 100 players, including No. 4-ranked Agnieszka Radwanska, will compete for the title of one of the fastest-growing women’s tennis competitions in Asia. It began as the Hansol Korea Open in 2004, but last year, it changed the main sponsorship from Hansol to KDB.

For the second year in a row, the Open is employing the hawkeye system. Last year, it became the first international-level event in the world to put in place the state-of-the-art refereeing technology.

Radwanska, the 2012 Wimbledon finalist and 2013 Wimbledon semifinalist, is competing in Korea for the first time. The 24-year-old from Poland will meet 71st-ranked Alexandra Cadantu of Romania in the first round today. The next highest-ranked player is No. 19 Maria Kirilenko, who won the Korean event in 2008. The second-seeded Russian will play against the qualifying round winner.

Other high-ranking players include No. 14 Carla Suarez Navarro of Spain; No. 21 Ekaterina Makarova of Russia; No. 25 Jamie Hampton of the United States.

Several Koreans have competed at the rare international competition on home soil, only to display a disparity with world-level tennis. Last year, Lee So-ra became the first Korean to get past the first round of the event, but only thanks to the withdrawal of Kirilenko due to an injury.

Lee Ye-ra, however, bucked the trend, as the 450th-ranked player upset the 140th-ranked Daria Gavrilova of Russia, 6-4, 6-1 to advance to the second round.

“We did not expect that this event would have grown this much when we launched it 10 years ago,” said Lee Jin-soo, the director of the KDB Korea Open.

The winners of the event include former world No.1 players Maria Sharapova, the 2004 winner, Venus Williams, the 2007 winner, and Caroline Wozniacki of Denmark, the 2012 winner.

“We will host the event successfully this year and try to make it grow beyond Korea into a leading sports event in Asia,” Lee said.