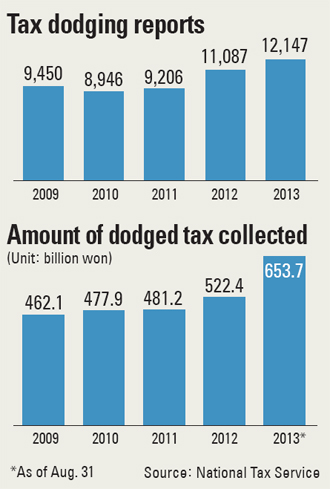 A National Tax Service initiative to reward those who report instances of tax evasion seems to be paying off. According to the NTS, the number of reports has surged, along with the amount collected.

In the first eight months of this year, the total number of reports of suspected tax evasion jumped 59.3 percent year-on-year to 12,147, and the government expects 18,216 reports by the end of the year. Last year, there were 11,087.

The total amount collected from evaders more than doubled from 322 billion won ($297.7 million) reported in the first eight months of last year to 653.7 billion won during the same period.

The tax agency expects the figure to surpass 980 billion won by the end of the year, compared with 522.4 billion won last year.

“Raising the ceiling on rewards [from 100 million won] to 1 billion won has contributed to the significant increase in reports,” said an NTS official. “Additionally, improving the ease of reporting, such as adopting a system so reports can be made through a mobile device, also has helped.”

Requirements for issuing rewards also have changed. Previously, the agency only rewarded those who reported tax evasion involving 100 million won or more; it now does so for cases of 50 million won.

Additionally, the tax agency started to reward those who report tax dodging involving bank accounts opened under other people’s names.

The NTS said 3,545 reports were made on money stashed in such accounts, and it was able to slap a total of 33.5 billion won in fines on 192 companies.

“As the economic environment is changing rapidly, such illegal acts have become more sophisticated,” an NTS official said. “To prevent such illegal practices, not only should the tax agency work hard in tracing down such acts, but it also needs the participation of the people.”

Because of the results so far, the tax agency is considering raising the ceiling on rewards to 2 billion won.