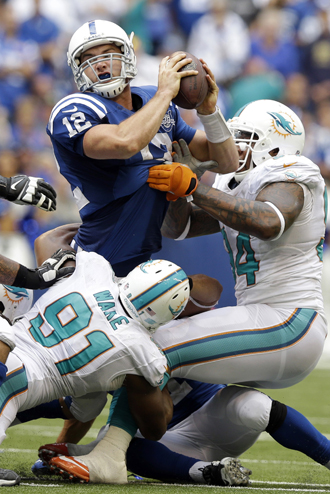 Indianapolis Colts’ Andrew Luck (12) tries to throw the football as he is sacked by Miami Dolphins’ Philip Wheeler (52), behind, during the second half an NFL game Sunday, in Indianapolis. [AP/NEWSIS]

EAST RUTHERFORD, New Jersey - Big brother got the better of little brother in what may have been their last showdown as Peyton Manning steered the Denver Broncos to a 41-23 pounding of Eli Manning and the New York Giants on Sunday.

Peyton improved his head-to-head record against Eli in the National Football League to 3-0 in the so-called “Manning Bowl” staged at MetLife Stadium.

The older Manning said he believed Sunday’s game could prove to be the last of the awkward regular season clashes between the brothers, who remain very close and talk to each other over the telephone at least a couple of times a week.

“I believe, certainly postseason is one thing, but I don’t believe I’ll make it to the next regular season one,” said 37-year-old Peyton, whose Broncos would not be in New York’s schedule rotation for another four years.

“So I think this would be the end of it. I’ll be happy about that and I know my family will,” he said.

A postseason clash would be an intriguing prospect, especially if it came together this season with the Super Bowl coming to MetLife in February in the NFL’s first outdoor, winter time Super Bowl.

Postseason is the one area where Eli has bragging rights over big brother. The younger Manning has won two Super Bowls and two Super Bowl MVP awards, with older brother Peyton owning just one of each from his days with the Indianapolis Colts.

But in the early going this season, the Mannings and their teams seem to be going in opposite directions.

Denver, one of the hot preseason picks to reach the Super Bowl as American Football Conference champions, improved to 2-0. The Giants, winners of two of the last six NFL title games, fell to 0-2 in the National Football Conference.

Peyton Manning leads the league in touchdowns with nine after tossing two more against Big Blue.

In Indianapolis, Ryan Tannehill did a better job than Andrew Luck managing his team’s offense in the second half and cheered his defense after it thwarted yet another Colts’ comeback bid to hold on for a 24-20 victory over Miami Dolphins.

It was a stark contrast from a year ago, when the two first-round draft picks met as rookies.

Luck stole the show that day by throwing for an NFL rookie record 433 yards and two scores as he delivered a three-point win.

In Sunday’s meeting, with a chance to show everyone how much he and the Dolphins (2-0) had progressed, Tannehill was the winner.