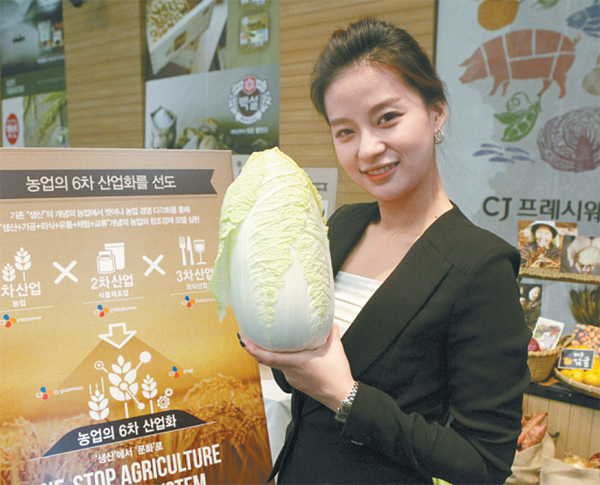 A mainstay of Korean cuisine is the napa cabbage, shown at the Shared Growth of Agricultural Industry and Enterprise event. Provided by the company

Food and entertainment conglomerate CJ Group said yesterday it will expand its purchase of agricultural products to 1.7 trillion won ($1.57 billion) by 2015, which is expected to create 53,000 jobs for farmers.

In addition, CJ plans to embark on providing a full range of support in conjunction with its business partners, such as development of Korean food menus, opening new distribution channels like home shopping and using broadcasting to inform consumers about agricultural products.

CJ announced the plan at the Shared Growth of Agricultural Industry and Enterprise event yesterday at the aT Center in Yangjae-dong, southern Seoul.

In order to address the difficulties of farmers, CJ CheilJedang and CJ Freshway will support ongoing agricultural research and development, and secure stable sales through contract farming, bulk purchasing and private contracts.

CJ O Shopping is set to transform the distribution structure through direct transactions with farmers and consumers. CJ E&M plans to promote Korean agricultural products through broadcasting to boost the globalization of Korean food.

“Our purpose is to find a way for CJ Group and farmers to grow together by maximizing the advantages of CJ Group, which has a variety of contact points with consumers through the manufacturing of food, operation of restaurants and distribution of media content,” said a spokesman for CJ Group.

“Also, according to government statistics as of the end of last year, because of CJ Group’s purchase of agricultural products about 23,000 people had jobs, and the number is expected to increase to 53,000 in 2015.”

Meanwhile, the Ministry of Agriculture, Food and Rural Affairs is set to prepare various measures in cooperation with CJ Group as it sees the shared-growth program of CJ Group is in line with the Sixth Industrialization of Agricultural Industry that the government has been emphasizing, which is a policy aimed at fostering high-value-added industry.