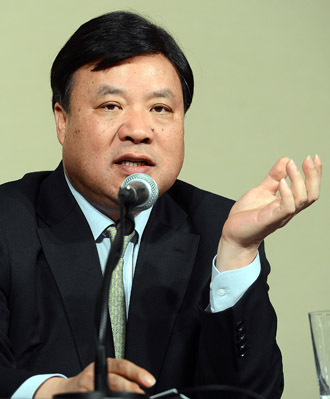 Shares of Celltrion, a biopharmaceutical company, fell more than 5 percent yesterday after local media reported the Financial Services Commission preliminarily concluded last week that the company’s chief executive may have been involved in unfair stock trading activities. Whether or not he will be handed to the prosecution for further investigation will be decided next week.

According to the report, the Financial Services Commission held a capital market investigation committee meeting Friday on the outcome of the FSS inspection of Kosdaq’s No. 1 market cap company and its chief executive, Seo Jung-jin. The investigation began earlier this year after allegations that Seo was involved in stock price manipulation.

The meeting continued into the evening, and the report said that the regulator tentatively confirmed that Seo and several other shareholders of the company took advantage of undisclosed company information to manipulate stock prices.

Seo convened a press conference April 16 to announce that he would sell his controlling stake in the company to a multinational pharmaceutical company, citing predatory short-selling as the primary reason. A short-sale is when a third party sells stock with the intention of buying it back at a lower price, thereby making a profit on the stock’s loss. At the time, Seo said the company had been suffering from falling stock prices since 2011 because of short-sellers and asked the regulator to launch an investigation. He said the company had been hurt by various false rumors spread by short-sellers seeking to benefit from a price drop.

The FSS later concluded there were no illegal intent by short-sellers, and the FSC’s capital market investigation committee also found no illegal activities found.

The report also noted that at the meeting, officials expressed the belief that Seo, in order to maintain the value of stock he had used as collateral for mortgage loans he received when stock prices fell, allegedly manipulated prices from April 2011.

“We are not able to confirm what came up in the meeting until the whole inspection process is completed,” said an official from the FSS. 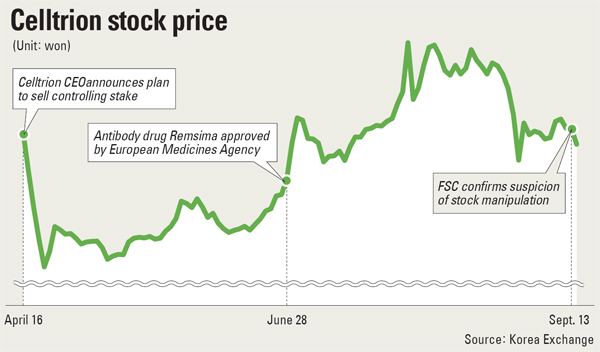 The FSC’s Securities and Futures Commission will meet Sept. 25 to decide whether or not to refer the matter to the prosecution.

“We don’t know what the result will be,” the FSS official said. “It could end up imposing administrative punishment on Seo and the company or be handed to the prosecution for criminal action.”

The FSC under the Park Geun-hye administration has been beefing up efforts to crack down on stock manipulation to bring more transparency to the market.

Celltrion yesterday released a statement dismissing suspicions raised by the regulator. “We attended the meeting [last Friday] and said we have been falsely accused,” it stated. “We did not admit any allegations that have been raised at the meeting, and we haven’t even been notified at all of the outcome of the meeting.”

The company also noted in the statement that the regulator has caused confusion in the market by disclosing a media report before the investigation is finalized at the Securities and Futures Commission meeting.