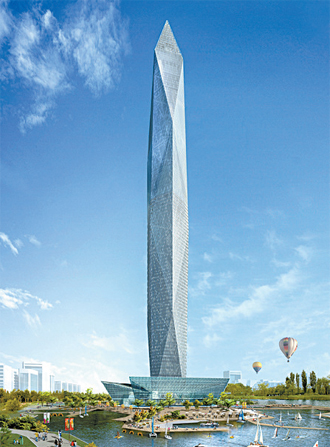 A computer-generated image of Tower Infinity planned for Incheon. Provided by GDS Architects

Korea will have world’s first “invisible tower” after a plan by U.S. firm GDS Architects was approved by the local government.

According to foreign media reports and the company, the 450-meter (1,476-foot) glass-encased Tower Infinity was recently approved for construction near Incheon International Airport. The project is also backed by Korea Landing and Housing Corporation, a state-run public housing developer. No construction schedule has been released.

The highlight of the building will be its invisibility, which GDS Architects said will be the result of LED screens and cameras used to create a “reflective skin.”

According to CNN and other foreign media reports, real-time images of the surrounding area will be streamed onto 1,500 LED screens from 18 weatherproof cameras. This will create an illusion of looking straight through the structure to the other side.

However, as the skyscraper is near the airport, local experts said that the company will also need to come up with measures to make the structure visible to airplane pilots.