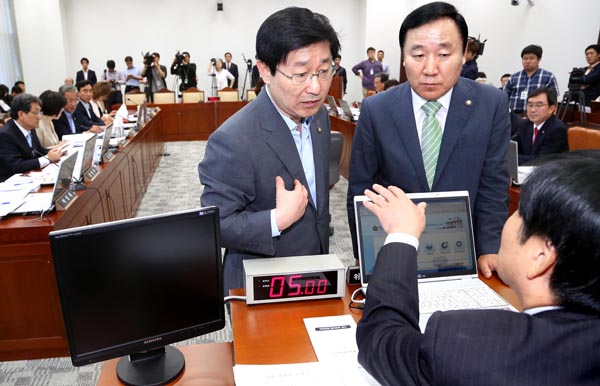 Lawmakers from the ruling and the opposition parties discussed whether to kick two lawmakers of a minor opposition party out of the legislature, focusing for the time being on whether they owe their seats to a rigged primary in 2012.

But the reason their fate is being discussed is because one lawmaker, Lee Seok-ki, has been detained for allegedly plotting an insurrection against the government on behalf of North Korea.

Members of the National Assembly’s Special Committee on Ethics held a closed-door meeting yesterday to introduce a bill to expel Lee and Representative Kim Jae-yeon, both from the opposition Unified Progressive Party, out of the legislature.

The bill was proposed jointly by the ruling Saenuri Party and the largest opposition Democratic Party in March in response to allegations of rigging of a March 2012 primary for proportional representatives.

Lee and Kim were two out of six UPP members who were eligible to become proportional legislators after the general election of April 2012.

All of the other proportional lawmakers who won in the allegedly rigged primary gave up their seats or defected from the UPP to create the Justice Party.

At a hearing before the discussion, Representative Kim was given an opportunity to speak. “I think this discussion on my qualification [as a lawmaker] is unfair,” Kim said.

Kim said both the ruling and opposition parties were “abusing powers against democracy” and said they view her as “a political enemy.”

Representative Lee Sang-kyu of the UPP attended the hearing on behalf of Representative Lee Seok-ki, who is in jail. He similarly claimed the discussion was part of a “political attack” on the lawmaker both by the Saenuri Party and the DP.

Some Saenuri lawmakers argued at the meeting yesterday that they should propose another bill to expel Representative Lee Seok-ki for plotting a rebellion against the government.

On Sept. 6, all 153 Saenuri Party lawmakers signed an agreement to propose a bill to expel Lee because he allegedly conspired to wage an anti-government insurrection.

But DP lawmakers said the older bill can be deliberated quickly, while the Sept. 6 bill cannot be voted on until Sept. 26 according to legal procedure.