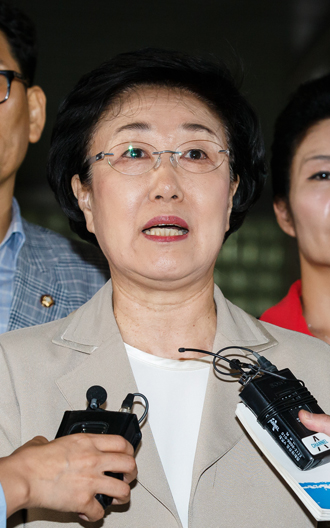 The court said the lower court mistook the facts and did not take into account Han Man-ho’s testimony given during the prosecutors’ investigation.

The former businessman’s interrogation was the sole direct evidence presented by the prosecutors against the former prime minister.

“Han [the businessman] had no reasons to lie during the prosecutorial investigation,” said the court, “and the fact that the defendant’s sibling cashed a 100 million won check issued by Han proves the graft accusation while the defendant has not offered any explanation for the matter.”

The court, however, did not send Han straight to prison in consideration of her public service as prime minister from 2006 to 2007 during the Roh Moo-hyun administration.

Han has been standing trial without physical detention.

If the Supreme Court confirms yesterday’s verdict, she will start her two-year prison term.

Following the first court’s acquittal, the Pyongyang-born lawmaker belonging to the pro-Roh faction went on to serve as chairwoman of the Democratic Party from January 2012 until the DP’s embarrassing defeat in the 2012 April general election.

She is now a proportional representative of the DP in the National Assembly.

“I cannot accept the verdict,” the former DP chairwoman told reporters. “I can’t help but think the verdict had political motives.

“I have nothing to hide and am fully innocent. I did not receive bribes.”

The former prime minister vowed to “fight until the end.”

The guilty verdict immediately drew a backlash from the major opposition party.

“The prosecutors themselves acknowledged that businessman Han’s testimony in the bribery case lacked credibility,” the DP said in a statement released yesterday.

“But the court overturned the previous ruling while ignoring all of his dubious testimony.”