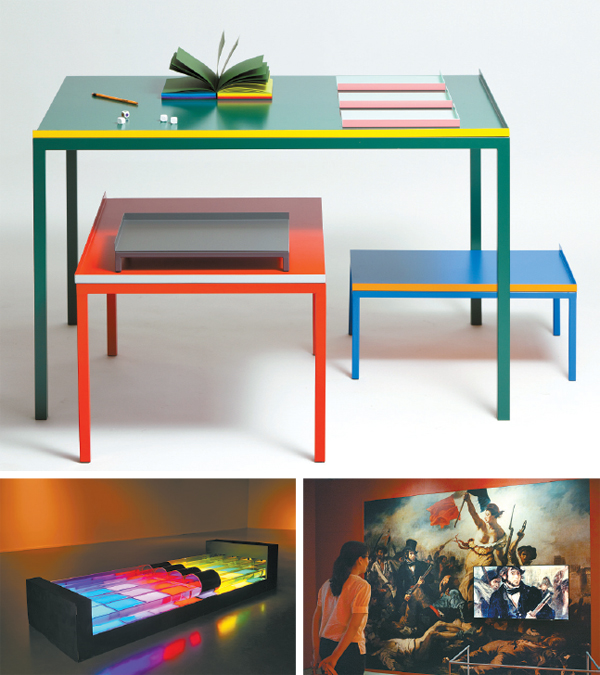 Clockwise from left above: Korea’s first electric artwork, titled “Space Construction,” is part of the retrospective of Korean avant-garde art pioneer Kim Ku-lim at the Seoul Museum of Art; Na Kim’s “Table A” is part of the “Design: Another Language” exhibition at MMCA Gwacheon; a viewer looking at the digital image of the old masterpiece “Liberty Leading the People” at the “A Digital Odyssey: Secret Museum” exhibition in the Seoul Arts Center. These museums are all open throughout Chuseok. Provided by the museums

For many adults, life is just too busy to make time for art and cultural activities. But with this year’s Chuseok holidays extending over five days, it is an exceptional chance to do a little gallery hopping. To meet that demand, many art museums and galleries are staying open throughout the Sept. 18-22 holidays, or at least open four of the five days, save for the Chuseok day itself on Sept. 19.

The National Museum of Modern and Contemporary Art, or MMCA, is taking things a step further, not only opening throughout the holidays, but also opening for free.

Other museums opening for the entire holidays include the Seoul Museum of Art, the Sejong Center for the Performing Arts and the Savina Museum of Contemporary Art in central Seoul and the Seoul Arts Center in the city’s south. Daegu Art Museum, in Korea’s fourth-largest city, is also open throughout the five days. Their admission price will be the same as usual, except for Savina, which will have some discounts.

Arario Gallery’s Cheonan headquarters in South Chungcheong will be open over the holidays, except for Thursday. It will also offer a 50 percent discount during the holidays. However, Arario’s Seoul branch in Cheongdam-dong will be closed throughout the five-day period.

Four museums and galleries in central Seoul - Gallery Hyundai and Artsonje Center in the art zone east of Gyeongbok Palace, Gana Art Center in Pyeongchang-dong and Seoul Museum in Buam-dong - are also open over the holidays, except for Thursday.

But many of other major art museums and galleries in Seoul are closed from today to Friday and then are open on Saturday and Sunday. Among them are two branches of the Samsung Museum of Art - Leeum in Yongsan District, where the retrospective of American sculptor Alexander Calder is being held, and Plateau, near Seoul City Hall Station, where Japanese pop artist Takashi Murakami’s solo show is going on.

These museums also include Sungkok Art Museum in central Seoul, where the retrospective of Korean sculptor Goo Bon-joo is being held; Daelim Museum, west of Gyeongbok Palace, where the exhibition of German publisher Gerhard Steidl is going on; and the Museum of Photography near the Olympic Park, where Korean photographer Min Byung-Hun’s solo show is being held.

Also closed from today to Friday are the Kumho Museum of Art, where the group exhibition “Art Peace” is going on, and the Kukje Gallery, where Indian artist Bharti Kher’s solo show is being held. Both are located east of Gyeongbok Palace.

Some art museums and galleries are closed throughout the five-day Chuseok holidays. They include Songeun Art Space on Cheongdam-dong art street in southern Seoul, where the British duo the Chapman Brothers are holding an exhibition; and Hakgojae, east of Gyeongbok Palace, where a solo show of Jin Meyerson is being held.

Here is a list of the shows that are open over the Chuseok holidays, whether for all five days or for four, except for Chuseok day on Thursday.

To Sunday: The exhibition offers elaborate digital reproductions of 35 famous paintings in Western art history, including “The Ambassadors” by Hans Holbein and “The Summer” by Giuseppe Arcimboldo.

This is a tour of the 2010 exhibition “Revelations,” traveling from the Petit Palais in France to Korea. The exhibition has in-depth analysis of each painting in terms of drawing, color, light, shadow, perspective, materials and emotion, with high-resolution images, holograms, 3-D multi-screens and customized sounds.

The exhibition is open from 11 a.m. to 8 p.m. throughout the Chuseok holidays.

To Sunday: As part of Hyundai Card’s culture project, the exhibition presents about 1,300 storyboard drawings from famous animated films by Japan’s Studio Ghibli, such as “My Neighbor Totoro” and “Spirited Away.” Storyboards are the blueprints for composition each scene in animated films.

The drawings are on displayed in chronological order, starting from “Nausicaa of the Valley of the Wind” (1984) to “From Up on Poppy Hill” (2011).

The museum is open from 11 a.m. to 8 p.m. throughout the Chuseok holidays.

To Sunday: This is a retrospective of Alphonse Mucha, the Czech artist and designer remembered as an iconic figure of the Art Nouveau movement.

The exhibition is divided into six parts. The first part features theater posters for the legendary French actress Sarah Bernhardt, including “Gismonda,” which propelled a young and poor Mucha into the spotlight. The second and third parts show the artist’s various ad campaign posters and decorative illustrations. Exhibits in the last three parts show works reflecting his interest in mysticism and admiration for Slavic culture.

The museum is open from 11 a.m. to 8 p.m. throughout the Chuseok holidays.

JORDAN MATTER: DANCERS AMONG US

To Sunday: This is a solo show for the New York-based photographer Jordan Matter.

About 60 photographs are on display that Matter produced in collaboration with the world’s most renowned professional dancers, capturing their marvelous moments, not on stage, but also on streets, subway stations and in other ordinary places.

Admission is 8,000 won. A 1,000 won discount is offered for four-person or larger families and for foreigners from today to Friday.

To Sunday: This is a solo show of Ci Kim, chairman of Arario, businessman and art collector, who has evolved into an artist himself.

The 30 works on display range from paintings to installations of found objects or from the waste remaining after other artists’ exhibitions in the gallery. Some of the paintings are made of crushed tomatoes or iron powder, as Kim has been eager to use unique materials.

Admission is 3,000 won for adults. A 50 percent discount will be offer during the Chuseok holidays, until Sunday.

The gallery is open 11 a.m. to 7 p.m. It is closed on Chuseok day (Thursday) but open for the rest of the holidays.

Take an express bus and get off at Cheonan terminal.

To Sunday: This is an exhibition accompanying the “Real DMZ Project 2013,” which is going on in the demilitarized zone between the two Koreas.

With 11 artists participating, the exhibition “investigates not only the ways in which the North is viewed from outside, but examines the relevant relationships that exist between the South and the North,” the museum said. The participants include well-known local artists, such as Ham Yang-ah, Noh Suntag and Park Chan-kyong, and foreign artists, such as Armin Linke, Hiroshi Minamishima and Sean Snyder.

Hours are 11 a.m. to 7 p.m. Tuesday to Sunday. It is closed on Chuseok day (Thursday) but open for the rest of the holidays.

To Sept. 25: This is a retrospective of Kim Tschang-yeul, 84, one of the most renowned Korean artists of his generation, to celebrate the 50th anniversary of his career. The exhibition features about 40 of Kim’s water-drop paintings, ranging from those made in the 1970s to his latest works.

Hours are 10 a.m. to 6 p.m. Tuesday to Sunday. It is closed on Chuseok day (Thursday), but open for the rest of the holidays.

GAUGUIN: VOYAGE INTO THE MYTH AND AFTER

To Sept. 29: This is the first-ever retrospective in Korea of Paul Gauguin (1848-1903), the legendary French Post-Impressionist.

About 60 paintings, sculptures and wood prints are on display. Among them are several paintings considered to be especially important in Gauguin’s oeuvre, including “Where Do We Come From? What Are We? Where Are We Going?” which the artist intended to be his last word on his Tahiti period.

“The Yellow Christ” and “The Portrait of the Artist with the Yellow Christ,” which Gauguin made in his earlier Brittany period, are also on display side by side.

THE HERO THAT IS WE

To Sept. 29: This is an exhibition of a group of artists in collaboration with Park Chan-ho, a former Major League Baseball pitcher who recently retired after a 19-year career. It is billed as the country’s first-of-its-kind art exhibition with a sports star theme.

The works on display include a life-size sculpture of Park covered with numerous photographs of the pitcher taken at different angles under various kinds of light, by artist Osang Gwon. The exhibits also include a wide collection of Park’s baseball-related items, trophies and photos, as well as the uniforms and gloves worn by his colleagues and rivals.

The museum is open from 11 a.m. to 6 p.m. Tuesday to Sunday. It is closed on Chuseok day (Thursday) and open for the rest of the holidays.

Although Kim received no formal art education, he led the activities of such groups as Painting 68, A.G. Group and the 4th Group. He continued experiments in various genres of art, including performance, body painting, installation art, mail art, land art and film. But only the sensationalist aspects of his works got much attention in the conservative climate of the times, and were harshly criticized.

This exhibition features about 30 works in various genres, including those Kim only conceptualized, but could not pull off in the 1960s and ’70s due to technological limitations. There are also reproductions of his lost works, including his experimental movie, “The Meaning of 1/24 Sec.”(1969).

The museum is open from 10 a.m. to 9 p.m. throughout the Chuseok holidays.

To Oct. 20: The show features four candidates for the Korea Artist Prize, co-sponsored by the National Museum of Modern and Contemporary Art (MMCA) and the SBS Foundation: Kong Sung-hun, Shin Meekyoung, Jo Haejun and Ham Yang-ah.

Kong won the prize last week. His oil and acrylic paintings depicting gloomy, ominous landscapes “reveal nature in its exhausted state after having been endlessly exploited by people,” according to the museum.

Admission is usually 5,000 won, but is free during the Chuseok holidays.

To Oct. 28: The exhibition features original prints by Robert Capa, the legendary war photographer. The show is held to commemorate the centennial of the photographer’s birth and the 60th anniversary of the armistice that ended the 1950-53 Korean War.

Many of the 160 photographs on display are war images from major battles of the early 20th century, including the Normandy landings by the Western Allied forces during World War II. But the exhibits also include portraits of leading cultural figures of that time, such as Ernest Hemingway, with whom Capa was a friend.

KUSAMA YAYOI: I DREAMED A DREAM

To Nov. 3: This is the largest retrospective ever in Korea of the famous Japanese artist Yayoi Kusama. The exhibition features 119 pieces of her works, encompassing paintings, sculptures and installations, as well as interactive media art. Many of the works have dots in her signature style. She is well-known for sublimating her obsession with dots into art.

The museum is open from 10 a.m. to 7 p.m. throughout the Chuseok holidays.

To Feb. 28, 2014: This is the exhibition of a gigantic multi-canvas painting, “Bigger Trees Near Warter,” by David Hockney, 76, one of the world’s most important living painters. The painting, which was created in 2007 by the British artist and housed at Tate in London since 2008, is part of the two museums’ exchange and collaboration programs. Occupying 50 canvases, the painting reaches 4.5 meters high and 12 meters wide (14 feet high, 39 feet wide), making it the largest of Hockney’s recent works.

Admission is normally 2,000 won, but is free during the Chuseok holidays.