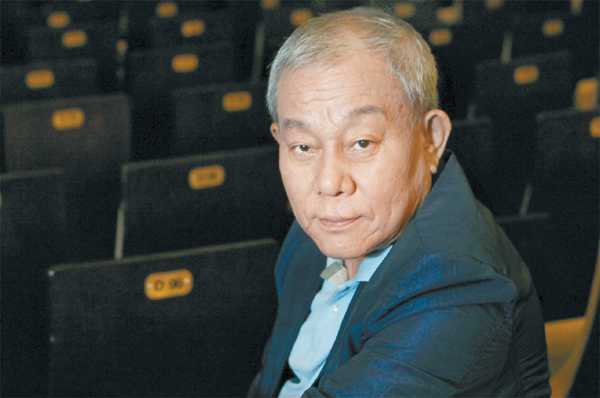 “Seopyeonje,” a book written by the late novelist Lee Cheong-jun, centers around the sad and often tragic life of a family of traditional pansori singers, traveling the country after the 1950-53 Korean War and performing their music. It has been made into a film and a musical - but, ironically, never a changgeuk, a Korean opera performed with pansori-style narrative singing.

(The pansori has just one singer, but a changgeuk can have up to 30 actors.)

Perhaps this is because many Koreans do not have much respect for either the pansori or changgeuk, considering them boring and difficult music forms, that theater directors have been so hesitant.

But Yun Ho-jin, 64, who is often referred to as “the godfather” of Korean musicals, challenged this notion, choosing to modernize the changgeuk into something that might “appeal to both Korean and international audiences.”

“I’ve directed theater plays and musicals but never a changgeuk,” said Yun. “So I had to research and study a lot about pansori, and I realized that it has such great strengths and charms of its own. But the reason it has been neglected even by our own people is the way it’s been presented.

“Many Koreans, especially the young these days, are exposed to Western-style music. Our ears are accustomed to the sounds of Western instruments, so traditional music such as pansori becomes tedious to the modern ear. In such a situation, just tossing together something very traditional and asking Koreans to enjoy it just because it’s ours isn’t the way to preserve our culture. We must make it a little more appealing, a little more interesting, so that audiences naturally get attracted to it. Otherwise, it only sparks resistance.”

Yun is the head of Acom, a theatrical production company, and the dean of the Graduate School of Performing Arts at Hongik University. He started as an artistic director for plays and expanded into creating Korean musicals, including “The Last Empress,” “Wandeuk” and “Hero.”

“The performance had been staged in March, right after I finished directing President Park Geun-hye’s inauguration ceremony,” said Yun. “I was really busy back then, so I couldn’t entirely put my focus on the production, but it still managed to receive a great response from the audience.”

To hear more about Yun’s changgeuk version of “Seopyeonje,” the Korea JoongAng Daily sat down with him last week. Here are some excerpts from the interview.

Q. You never directed a changgeuk or studied pansori before. How did you accomplish this?

A. Back in 1972, I had a chance to listen to the entire rendition of a one-person pansori performance of “Simcheongga,” which lasted about four hours. Despite the length, I was really touched by the performance. That’s when I realized that pansori is our great asset. I thought to myself that the pansori “Simcheongga” would be interesting to watch as a changgeuk, because in pansori, only one person sings all the characters in a story. But because I am a theater director, I forgot about it and carried on with my own work. When Ahn Ho-sang became the president of the National Theater of Korea in 2012, I happened to say to him in passing that great literary works like “Seopyeonje” would be far more interesting as a changgeuk than a film or a musical. So when Kim Seong-nyeo became the artistic director of the National Changgeuk Company, she called me and said that she had heard from Ahn about my comments and asked if I could do it. I accepted, but I had a lot on my plate, including the preparation of President Park’s inauguration ceremony, so I barely managed to stage it in March.

As I didn’t know anything about pansori, I worked closely with the veteran pansori singer Ahn Sook-seon to create “Changgeuk Seopyeonje.”

What was the main focus for you in directing “Changgeuk Seopyeonje”?

I really put a lot of thought into how to approach the audience, who think of pansori and changgeuk as boring and difficult traditional performances. I wanted to create a changgeuk that’s enjoyable. That’s why I decided to use the pansori “Simcheongga” as the main source of this production. The story is ironic, because in the story of Simcheong, the devoted daughter Simcheong sacrifices her life to give her blind father his sight back; but, in “Seopyeonje,” the father Yu-bong, who is a pansori singer, makes his daughter go blind because he believes that the sound of pansori can be elevated to the highest standard only through han [the collective feeling of oppression and isolation]. So the two contrasting sentiments works well in “Changgeuk Seopyeonje.”

Veteran film director Im Kwon-taek first made “Seopyeonje” into a film in 1993, and it was also produced as a musical in 2002. Did you watch them?

I’ve watched the musical while it was being staged and the movie, I downloaded it only recently and watched it. But both of them, in my perspective, have a crucial point missing, which is explaining the real reason why the father blinds his daughter. It’s dealt with quite vaguely in both the film and the musical. In fact, it’s vague in the novel as well. But I believe, to appeal to the modern audience, the story has to be logical.

For example, it’s hard to believe that the father makes his daughter go blind just so that she gets a profound sense of han and becomes a true pansori singer. What’s the real motivation behind that? The daughter Song-hwa and her brother Dong-ho are half-brothers and sisters. They depend on each other as they travel around performing pansori, so it’s quite realistic for them to feel something more than sibling love. The father could’ve found out about this, misunderstood their closeness and imagined something worse. It’s like a folk tale, but I heard that such situations existed in the world of pansori singers, as they traveled a lot, always spending time with each other. When they perform, they unite and become one and sometimes moral and ethical thinking collapses and things happened. So such a “real motivation” can be analogized from their lifestyle. The father not only made his daughter go blind because he wanted his daughter to become the best pansori singer through deprivation, but also because of many other reasons. In the end, the performance finishes with the daughter and the father reconciling, as the father realizes that the height of pansori cannot be reached only through han.

You said you’ve added modern touches to changgeuk to appeal to the modern audiences of today. Have you always been so concerned about Korean traditional culture such as changgeuk and pansori being neglected?

I’ve realized that pansori is our great asset, and there’s a reason behind why our ancestors enjoyed it so much in the old days. I wanted more people, including young Koreans and even foreigners, to appreciate pansori - not because we have to, but because we want to.

For example, let’s say we want to globalize cheonggukjang [fermented soybean paste soup that has a strong smell]. We don’t want to just thrust it on young Koreans or foreigners. It needs to have a story. Why cheonggukjang should be enjoyed, or why it’s delicious. You have to make people interested in it and motivate them to try it. And for them to enjoy it, you could cook cheonggukjang in a different way, maybe less strong or mixing it with something else, so that it can be enjoyed more by them. It doesn’t make cheonggukjang a Western food. It’s still a Korean food. I believe traditional culture is the same. While I was studying in New York, I heard from Americans that they’ve heard and seen enough of Korean traditional performances like pansori, fan dances and samulnori. They wanted something more than just that, something that is traditional and that can touch their hearts at the same time. That’s why I worked with Korean-Japanese pianist Yang Bang-ean for “Changgeuk Seopyeonje,” to give a sprinkle of Western sound, of a piano on top of the traditional Korean sound of the pansori. It’s more familiar and easier to listen to for the modern ear.

You said you want to appeal to foreigners as well. Will you have subtitles for them to enjoy “Changgeuk Seopyeonje”?

Yes, subtitles are provided in Engish. I realized that foreigners can really appreciate Korean culture through the performing arts. When the Bond girl, Caterina Murino, visited Korea in 2006, I heard her say in a press conference that she watched my musical, “The Last Empress,” the night before because she had some free time. I always have English subtitles for all my productions, so the musical had it, too. She said that she was greatly touched by it and said that she didn’t know that Korea had such a great show like that. There was also this foreigner in Korea who was head of the Korean branch of a foreign stock company. After watching “The Last Empress,” he told me that he’s been living in Korea for about two and a half years, but the two-and-a-half hour show of “The Last Empress” taught him more about Korean culture than his stay in the country. The following year, when we staged the musical again, he visited again with his parents-in-law. So, yes, “Changgeuk Seopyeonje” has English subtitles. And I want to say to [potential audiences], no matter what you’ve heard about changgeuk and pansori - maybe that it’s boring or difficult - that this production will be different. So don’t miss it.