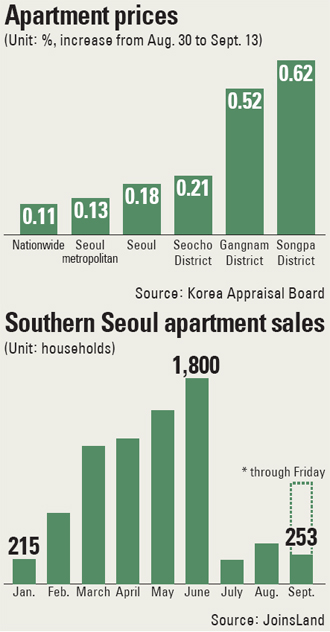 The housing market in the southern Seoul area is picking up, with prices surging and more transactions and buyers competing for newly built homes. With the real estate rebound in one of Seoul’s wealthiest areas, the question is whether that momentum will spread to other parts of the capital and across Korea.

Trends first seen in the housing market in the southern Seoul area, which includes Gangnam, Seocho, and Songpa districts, are slow to show up elsewhere. Insiders note that the signs of life in southern Seoul come after government measures were announced on Aug. 28 to revive the moribund real estate market. The measures announced by the Ministry of Land, Infrastructure and Transport and the Ministry of Strategy and Finance included two new mortgage programs and a slash in acquisition tax.

The price of a 103-square-meter (1,108-square-foot) apartment at Jamsil Jugong 5 complex in Songpa District, for example, is between 1.08 billion won ($928,390) and 1.1 billion won, which is up 20 million won to 30 million won since the announcement. The current price is nearly 100 million won more than it was in July after the temporary acquisition tax cut on home transactions ended in June.

“Apartment owners are asking for higher prices now that demand has picked up,” said Park Jun, a real estate agent.

“More people are making inquiries about housing prices with the thought in mind to buy,” said Lee Kwon-soon, a real estate agent in Banpo-dong, southern Seoul. “With more inquiries, apartment owners are having second thoughts on putting their houses up for sale and are monitoring price trends.”

Over the past month or so, the number of house transactions also surged.

Competition is also fierce in the market among families hoping to buy newly built homes in southern Seoul. A 128-square-meter home in the Raemian complex in Jamwon-dong was attracting 288 subscriptions from potential buyers.

Industry insiders note that the level of fierce competition is similar to 2000, when the real estate market was booming.

According to the Korea Appraisal Board, other regions are also slowly seeing some effects of the Aug. 28 measures. Apartment prices nationwide fell after the government ended its acquisition tax cut program, but are heading up again this month.

“When apartment prices in southern Seoul go up, then other regions also get a boost in prices on hopes that prices will surge,” said Park Won-gap, an official from KB Kookmin Bank.