For some, holidays more burden than pleasure

For some, holidays more burden than pleasure

Carrie Yoon, a 34-year-old hotel employee, is the envy of all the women around her whenever national holidays are nearing. All of her friends, whether they are married or not, and even her mother, feel jealous of her because she is free from the day-long routine of flipping jeon, a pancake-like dish that is a holiday staple, which makes the women smell like a huge chunk of fried food.

“My friends often say they wouldn’t be jealous of me if my husband is a millionaire, but they are because I got married into this family,” said Yoon with a laugh. “My father-in-law thinks it is better to burn incense every day to pay tribute to ancestors instead of toiling and preparing charye.”

Instead of preparing food for charye, a veneration ritual that takes place during Chuseok (Korean thanksgiving) and Seollal (Korean New Year), Yoon sometimes travels abroad with her husband and other times with her in-laws on such holidays. This year, she is going to Guangzhou, China, over the Chuseok holiday with her in-laws and husband.

“Since I’m free from such responsibilities, I can’t wait for national holidays. Looking at women who sigh even before the holiday, I’m content with my marital life.

“I grew up watching my mother have a hard time preparing food for the holidays. She usually begins cooking three days in advance of the day of charye. It is good to respect ancestors and get together with families, but one or two women prepare all the food for the entire family, and I think it is too much even though it is a traditional ritual.”

The nation’s biggest holiday, Chuseok, starts today. Cars heading back to hometowns usually dot expressways, and a majority of Koreans conduct rituals for their ancestors early in the morning of Chuseok. 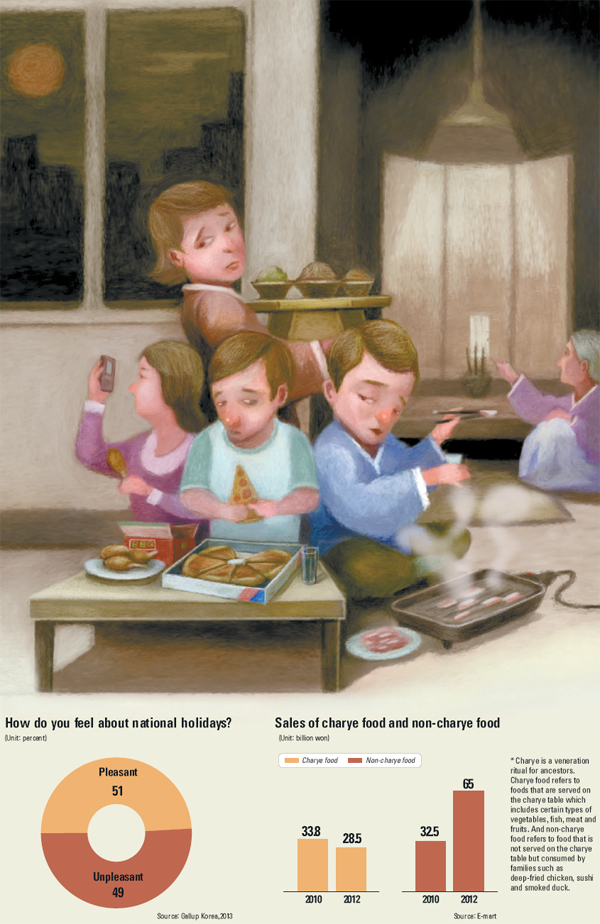 Chuseok originated as a ritual in which the first crops of the season are dedicated to ancestors. It was also a festivity for almost all Koreans because a bowl of steamed rice and meat dishes were served on the table, which rarely happened except on national holidays.

The holiday, however, was more than just a harvest festival in this Confucian society.

“It was an event in which you showed your ancestors that your lineage is continuing well, which is a very symbolic ritual. Such a characteristic doesn’t agree with modern Koreans who are practical and individualized, though,” said Shin Kyung-ah, a professor of sociology at Hallym University in Chuncheon, Gangwon.

Frequently searched key words during national holidays are telltale signs that people think of Chuseok and Seollal in different ways than people did in the past.

Earlier this year, the JoongAng Ilbo partnered with Daumsoft, an IT company which analyzes postings of blogs and social networking sites, and found that “holiday,” “event” and “present” were the words most searched for in February, instead of words related to tradition, such as “charye” and “songpyeon,” a rice cake steamed with pine needles.

The spirit of the ritual that originated from Confucianism has lost its luster, but its obligations seem to remain and put pressure on a lot of Koreans.

In a survey conducted last week among 643 salaried workers by Saramin, an Internet job search Web site, 64.4 percent said they feel burdened when preparing gifts on Chuseok for their parents and relatives.

Another recent survey conducted among 600 housewives by NS Home Shopping said 35 percent of survey participants said they have a hard time preparing food, and 28 percent said they feel pressured to prepare gifts.

Another poll shows that Koreans have split feelings about national holidays.

Gallup Korea surveyed 1,511 Koreans in February before the Lunar New Year and only 51 percent said they look forward to national holidays. In 2002, however, 65 percent said they were happy with Chuseok and Seollal.

Three out of 10 households said they do not even conduct charye.

In recent years, an increasing number of families have replaced their family charye with a joint charye, which often takes place at Buddhist temples and Catholic churches. Large groups pray, with the food prepared by the staff at the church or temple.

For instance, Bongeunsa Temple in Samseong-dong, southern Seoul, received 1,272 requests for joint charye in 2007, but the number of requests rose to 2,348 last year.

It costs 20,000 won per family for joint charye, while it is 400,000 won for solo charye, but requests for solo charye have recently surged and they are often fully booked within a day of being offered.

“The media often says the tradition and meaning of national holidays have faded into the past, but it is not correct to say so,” said Kim Seung-kwon, a senior research fellow at the Korea Institute for Health and Social Affairs. “People are trying to find out ways to have fun during the holiday by minimizing their physical work and efforts.”

This tendency can be found in the sales of charye and non-charye food.

E-mart, the country’s leading discount store chain, tracked sales of food products during the Chuseok and Seollal holidays from 2010 to 2012 and found that sales of non-charye food have surpassed those of charye food.

E-mart said it sold 33.8 billion won worth of charye food in 2010 for three days before Seollal in 2010, but sales fell to 28.5 billion won last year. Meanwhile, sales of non-holiday food, which is not served on the charye table but consumed by families, such as pork bellies, sushi, fried chicken, tonkatsu, pizza and smoked duck, have risen from 32.5 billion won to 65 billion won during the same period.

Charye food refers to certain types of stir-fried vegetables such as sprouts, fruits like pears and apples and some meat and fish.

“We’ve noticed such a change from 10 years ago,” said Cho Nam-su, a team head on E-mart’s public relations team. “In order to keep up with the trend, we’ve also launched small servings of charye food as home meal replacement from last year.”

Traveling and having plastic surgery have also become common during holidays.

Hana Tour, the country’s leading tour agency, said Incheon International Airport will be more crowded during Chuseok than ever before. About 500,000 Koreans are expected to go overseas between today and Sunday.

“About 25 percent more people go overseas this year from a year ago. It’s now impossible to book any airplane and tour package,” Song said earlier this month.

Typical popular destinations are Guam, Saipan and Bangkok, where families can take a break for three or four days.

“Chuseok is the busiest time for us,” said a counselor working at ID Hospital in Sinsa-dong, southern Seoul. “Since the holiday is long this year compared with the previous year, many of our patients would go through difficult surgeries, such as nose job and double-jaw surgery [jawbone-reduction surgery].”

Many reasons for shift

A decrease in Confucian values and the individualization of the Korean society are often blamed for the weakened presence of national holidays, but Kim, the senior research fellow at the Korea Institute for Health and Social Affairs, adds that enhanced women’s rights have also played a pivotal role.

“There is surely a link between the two. With more women making their voices heard, traditional rituals and events lose their ground not only in Korea but in other countries,” said Kim.

Ko Kyung-sil, a mother of two sons, began to attend Sunday worship services after her first son got married five years ago. Ko, 63, was determined not to hand charye and jesa (a memorial to one’s ancestors) down to her daughters-in-law.

“Preparing jesa and charye up to 10 times a year was a pain for me. I frequently told my husband that I would stop doing all these rituals when my in-laws pass away,” said Ko.

Ko pays respect to her late in-laws by having prayer meetings.

Considering all the social changes surrounding national holidays, experts say it is time to come up with novel ways to celebrate holidays based on modern times.

“Now all of us are affluent enough to live on, but many of us are exhausted from work and are isolated from families and friends. That’s why the definition of national holidays has to be changed,” said Shin, the professor of sociology at Hallym University. “What we need is quality time with families instead of an assorted number of jeon and enough me-time in which you could gain energy. And that is probably a new definition of national holidays.”