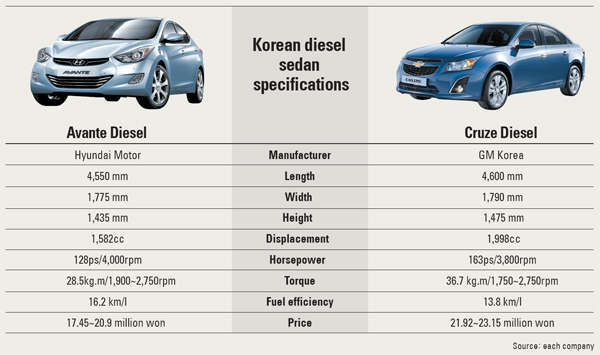 Korean automakers are releasing diesel sedans to compete with the imported cars that have been strong sellers in the local market.

For the first eight months of the year, a total of 103,417 imported vehicles were sold, up 23.7 percent from a year ago according to the Korea Automobile Importers and Distributors Association.

Experts point out that one of the factors behind rising imported car sales is the popularity of diesel models with cost-conscious consumers.

Diesel vehicles accounted for 60.8 percent of total imported car sales, or 62,851 units, this year. The figure is 52.5 percent higher than a year ago.

Hyundai Motor, the nation’s largest automaker, released a face-lifted version of the popular compact New Avante (known as Elantra overseas) last month that included a diesel version for the first time since 2010.

The company said it focused on reducing the noise of diesels by incorporating more sound-absorbing materials and covers.

“The popularity of diesel sedans has been notable these days, and to actively cope with the changing market we released Avante Diesel,” Kim Sang-dae, director of marketing strategy at Hyundai Motor, said during a test drive event last month.

Joining Hyundai is GM Korea, the third largest automaker. On Monday, the company introduced the Chevrolet Cruze LT+, an entry trim for its Cruze diesel compact sedan that has been sold here since 2009.

“Compared with gasoline engines, diesels have high fuel economy and powerful torque,” said Cho Inn-sang, director of product marketing at GM Korea. “The Cruze Diesel will expand consumer choice in diesel sedans, which has been limited to import cars.”

Korean diesel cars started to show up from 2005 when Hyundai and Kia released compact and midsize sedans. With the debut of the Pride Diesel in May 2005, Avante XD, Verna, Lotze, and even Sonata, came out with diesel models. However, sales of diesel sedans slumped in the mid-2000s and disappeared from the local market in 2008 when production was discontinued.

But in recent years, with rising gas prices and enhanced technology that made diesel engines smoother and quieter, diesels have been making a comeback. For the first half of this year, Hyundai’s diesel i30 and i40 hatchback sales represented 56.6 percent and 77.5 percent of their total sales, respectively. With the latest Avante Diesel and Cruze LT+, local automakers are signaling that there are more diesel sedans to come.

Kia, the nation’s second-largest automaker under Hyundai Motor Group, is set to a release a diesel-fueled K3 compact this year. Hyundai is also considering selling a Grandeur with a 2.2-liter (0.6-gallon) diesel engine and developing a diesel version of its Genesis luxury sedan to compete with imports like the BMW 520d, the country’s best-selling foreign brand.

GM Korea is preparing a diesel-fueled Malibu, with industry sources indicating that the midsize sedan with its 2-liter turbo engine will be produced starting next March at the company’s Bupyeong plant in Incheon. Ssangyong Motor, which specializes in making diesel SUVs, is also reported to be considering a diesel sedan.

However, experts said releasing diesel sedans don’t guarantee success given that local models are not as economical as foreign cars.

One advantage that local diesel cars have is price, although foreign auto brands are chipping away at the cost of their vehicles with aggressive marketing promotions.

“It is true that Hyundai and Kia have made progress on diesel technology, but it is still tough to challenge European automakers, which have a long history of manufacturing diesels,” said Kim Pil-soo, an automotive study professor at Daelim University College. “The brand value also is important and we have to see how much local automakers can narrow that gap with their upcoming diesel models.”