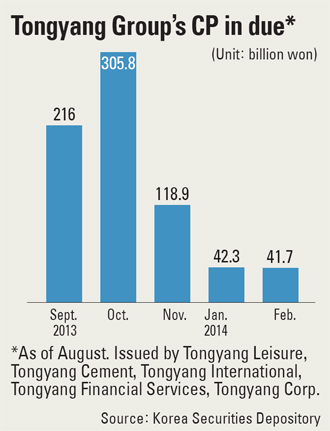 Speculation is rising about whether Orion Group will help financially pressed Tongyang Group pay back its debts after the Chuseok holidays.

According to industry sources, the two groups’ owners, who are close relatives, are expected to meet over the holidays to discuss the situation of Tongyang Group.

According to finance industry sources, more than 1 trillion won ($921 million) worth of commercial paper (short-term unsecured promissory notes) and corporate bonds issued by Tongyang are set to mature this year.

According to data from the Fair Trade Commission, Tongyang’s debt ratio exceeds 1,200 percent this year.

According to industry sources, Tongyang wants to raise 500 billion won to 1 trillion won by selling asset-backed securities. It reportedly wants to raise its credit level by offering Tam and his wife’s stake within Orion Group.

In return, Tongyang said it would promise Orion to pay back its debt as soon as possible once sales of affiliates like Tongyang Magic, a home appliance maker specializing in ovens and dishwashers, are complete. The company is also expected to sell some shares of Tongyang Cement and Tongyang Securities.

Industry insiders expect it will not be easy for Tam and his wife, Lee, to offer their Orion group shares as security because they could lose ownership of the group. In addition, both could be charged for breach of trust if financial damages occur.