Shops smaller, but not profits

Shops smaller, but not profits 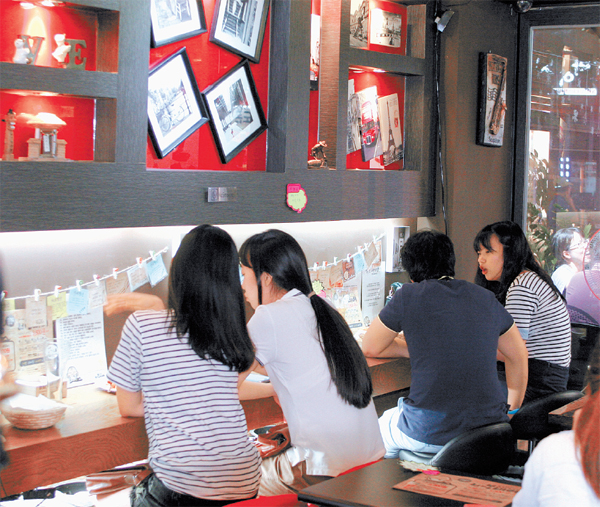 Kang Min-kyeong’s pub in Bucheon, Gyeonggi, is 26 square meters (280 square feet). Kang said most customers visiting the pub are women in their 20s and 30s who prefer a smaller and more personal venue in which to enjoy their drinks. Provided by Korea Institute of Startup Strategies

Korean restaurants are downsizing their spaces in an effort to reduce the cost of rent and staffing, and the popularity of mini-stores of 10 pyeong (355 square feet) is growing because they can yield outsized income and maximize profits.

“You can be the next start-up with only 70 million won ($64,714) to 150 million won, including purchasing cost, to open a 10-pyeong store,” said Lee Kyeong-hee, chief of Korea Institute of Startup Strategies. “These compact stores are leading the start-up market since they save up-front investment costs and are profitable.”

Owners usually open snack bars with four or five tables and a kitchen, and leading the way are those specializing in rice burgers in which bun-shaped rice patties replace bread. New franchise brands like Ddoong’s Rice Burger and Bongu’s Rice Burger were established last year, with their signature products selling for 1,500 won to 3,000 won.

Ahn Ki-seop, 42, runs a Ddoong’s Rice Burger store in Noryangjin, western Seoul, with monthly sales of 27 million won out of his 12-pyeong shop.

“I used to run a chicken restaurant for three years but shut it down,” Ahn said. “The next business item I learned online was the rice burger bar. I could easily open it in a small space and with a small amount of capital.”

About 70 percent of customers in the Noryangjin area are students, from teenagers to thirtysomethings.

“The buns are made with rice, not bread, which is better for my digestion. They are popular among students because they inexpensive,” said Kim Hyeong-joon, a student preparing for the CSAT.

Because her pub is even smaller than other snack bars at 8 pyeong, Kang has lowered price ranges for some side dishes. Her cheese french fries, Japanese-style boneless chicken fries and ddeokgalbi (minced beef patty) are in the 3,000 won range, while a 400cc draft beer is 2,000 won.

“Our main customers are women in their 20s and 30s, who prefer small and cozy stores to large pubs that are usually noisy and crowded,” Kang said. “I only spent 40 million won to start the store, excluding the store purchasing cost. That included franchising and cooking training fees, interior design and utensils.”

The downsizing trend among startups circle, but it now reaches to existing franchise companies.

Many new franchise food stores are about 33 square meters and specialize in Japanese ramen, onigiri, tonkatsu (pork cutlet) and pasta.

Onigiri and Igyudong is a Japanese food franchise of 179 stores nationwide. Its main products are onigiri, Japanese triangular kimbap, with more than 20 selections priced from 1,000 won to 2,000 won. The company recently created another recipe served in a paper cup for takeout customers.

The company estimates it takes 50 million won to open a 33 square meter store. On the other hand, small size can be a weak point. The stores only can take up to five customers. The customers may feel uncomfortable squeezed inside. The store easily gets messy due to lack of space to store restaurant facilities and equipment.

“New owners have to focus on producing high-quality food that will keep attracting customers despite the close quarters for sitting and eating. Takeout and delivery are useful options for boosting sales,” Lee said.