For famed liberal columnist, life is art and politics is a game

For famed liberal columnist, life is art and politics is a game 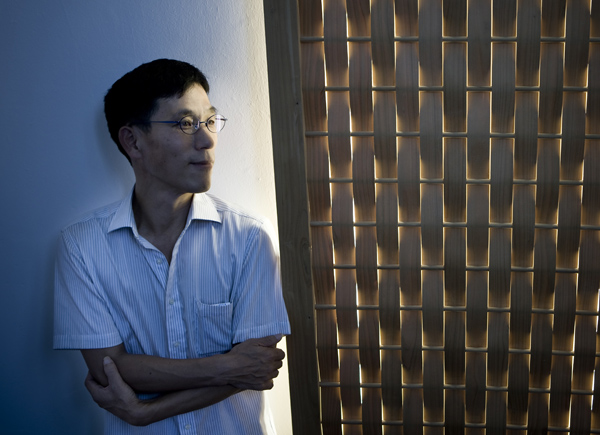 Known for his sharp, incisive insights and direct, biting remarks, Chin Jung-kwon is one of Korea’s most famous liberal commentators and columnists. Some praise his commentary, calling it liberating, while others call him rash.

Just one or two lines written on his blog or Twitter account can spark wide-ranging debates all over the nation.

Love him or hate him, most would agree that few political debaters have a higher profile.

So what does the star critic make of his own prominence?

Chin, a Dongyang University liberal arts professor, studied art theory for his undergraduate and graduate studies. It seems that often, when soul-searching, the 50-year-old goes back to what he studied. He has a unique way of “reading” the world, examining things through the window of art. The JoongAng Ilbo recently sat down with Chin to discuss the importance of art.

Q. While you are a popular political critic, you are also an expert on aesthetics. What is the function of art?

A. Originally, the function of the arts was to charm. It was to illustrate people’s dreams that couldn’t be materialized in real life. Just look at the images of women in the Paleolithic era. Their breasts and buttocks are portrayed in an oversized manner. It’s the same with the cave paintings of animals in Spain and France. People hoped for fertility and prosperity. Cave art was just symbolic, but it shows what people hoped for in real life. So, basically, they saw in art a future that hasn’t arrived yet. It’s the same with art today.

I can’t speak for everyone. But I can speak for my father [who was a Protestant preacher] and me. In the case of my father, I remember there was a poem written on the front of his Bible. It went “I wanted this, but it didn’t work out,” “I wanted that, but it didn’t work out either,” and on and on like that. But at the end it said “Only later did I realize that God did give me all of those things after all.” At the bottom, it said, “from a note found in a pocket of a dead U.S. soldier.”

I went to Wolmi Island in Incheon recently. I went to a cafe near the sea, with poetry books on its bookshelf. I randomly took out one and opened it. And there it was: The same poem that was on my father’s Bible. The title was “I Pleaded.” I think at that moment I experienced some sort of healing, too, but I also felt a shudder from the inexplicable coincidence. I guess this is why people like art, literature and popular culture.

It’s because people are imperfect. Their memories, their characters - they are all imperfect. They are frustrated by reality and their limits. They fall into despair about the future, the present. All these become “scars” that remain with them. But art can help people find a breakthrough.

For example, at the presidential election in December, half of the people were happy with the results, but the other half fell into despair. What helped them somewhat was the film “Les Miserables,” which opened in theaters around that time. Many said they got some sort of healing from it.

Art is extremely freeing. People look at an artwork, admire it and long for the freedom in it. They get a taste of the freedom that they will achieve in advance. That in itself is healing.

What about you? What is a piece that healed you?

“Faust” by Johann Wolfgang von Goethe. After experiencing all kinds of trials and errors, Faust says at the end that life is so beautiful. I think at that very moment Faust finds salvation, in a way. I, too, wait for the moment when I can say “The life I lived was so beautiful” and get salvation. But the “salvation” here is different from the one that religions talk about.

Until now, in the world of aesthetics, the word “scar” wasn’t a main theme. All this talk about “scars” and “healing” are new trends. Before neoliberalism, intellectuals talked about “liberation.” After neoliberalism, they are talking about “scars.”

People are bound to get hurt. Socialism, Communism and other types of allegedly “liberated” worlds may come. But, still, people will get hurt. Having to live with others in itself is a kind of pain. There are two types of scars: social and individual. Social scars occur from issues like job insecurity and gender inequality, and they require social solutions. But what are you going to do with individual scars, which are based on the fact that we are all ultimately alone from birth? That’s where art and philosophy come in. They can help.

What kind of scars have you healed through art?

I have made many mistakes growing up, in particular with relationships. I find it terrifying when conversations stop and there is silence. In fact, I am very introverted. Some people laugh when I say this and do not believe it, but debating fiercely on TV is a kind of persona, my mask. That made me wonder if I had a problem, if something was wrong with me.

But the phrase Faust said, that men who try make mistakes, helped change me. I realized if I was afraid of the mistakes I’m going to make, I wouldn’t be able to do anything. It was a moment of epiphany. Healing through art always comes at that moment of “encounter.”

So today, I have three things that I value the most: First, my intellect; second, playing; third, salvation. About the second value, I always try to see life itself as a game. The upside of that is that you never hate your enemy. When you play baduk [Go], you don’t hate the enemy. So even when I have a political opponent, when I think life itself is a game, it gets less brutal.

Is that how you handle all the criticism and slander against you online?

Definitely. There are thousands of posts that criticize me on my blog. But I don’t get hurt from them, not at all. Be it the ruling Saenuri Party, the main opposition Democratic Party; neoliberalism or the Korea-U.S. free trade agreement - it’s all game and [the roles they play] are agreed upon. There is no reason to risk people’s lives to win. I’m saying, let’s view life as a game and as art. After all, every life is one big artwork.

I understand that everyone wants to be the winner these days. But who really is a winner? Everyone has something to be disgruntled about. High school graduates feel inferior to university graduates. People who went to school outside Seoul feel that way compared to people who studied in Seoul. People who graduated from a Korean university have a sense of inferiority to someone who graduated from an Ivy League school. In that sense, everyone is a “loser.”

Then who is a winner?

I say, those who continually work to better themselves. But the key here is doing that not to please others but to please themselves. That way they can be one step closer to being happy. And a happy person is a winner.

When you have a meal that costs 10 won (1 cent) repeatedly, you get sick of it. But the same goes for costly meals. When you drink wine that costs 10 million won a bottle or 20 million won many times, you no longer like it. You’d prefer a cheap bottle of makgeolli [traditional Korean rice beer].

Although it is cliche, happiness doesn’t require a lot of money. There is just no need to set up so many ambitions that are out of reach, then get frustrated when you can’t achieve them. It’s easier when you examine the things that you already have.