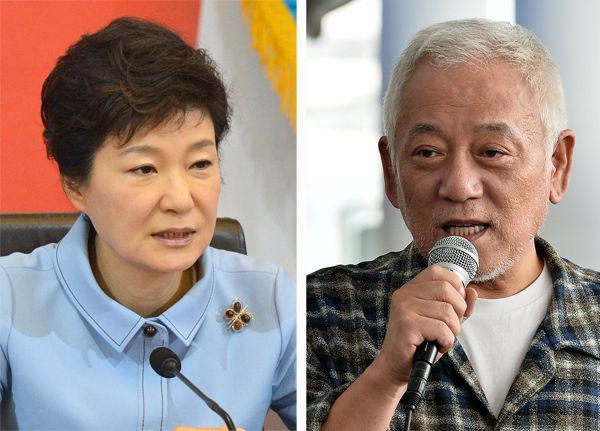 President Park Geun-hye yesterday warned Democratic Party members to stop their months-long demonstration in front of Seoul City Hall, following the failed negotiations with the opposition leader to persuade the party to return to the Assembly.

“If the opposition party sticks with its outdoor protest and turns a blind eye to the livelihood of the people, they will face public protests,” the president said at a cabinet meeting yesterday. “And then they will have to take responsibility for that.”

Park said the protest is not “politics for people” because the opposition party seeks only its own political advantage.

“I was also a leader of an opposition party before, and I also salvaged a party that was in trouble,” she said. “But I have never committed an act to sacrifice the people for the purposes of the party.

“If the opposition party continues its protest and refuses to review the bills regarding the livelihood of the people .?.?. there will never be politics for the people.”

The president said the largest opposition party, which holds 127 seats in the 298-seat Assembly, is abusing its power by using the newly-revised National Assembly Act to block legislative action. The act prohibits the Assembly speaker from bypassing standing committees to bring a bill directly to the floor, allowing him to break a deadlock in a committee only for bills addressing a national emergency or natural disaster, or when a supermajority of committee members or of the entire legislature agrees to let him do so.

“The National Assembly should not tackle issues regarding the livelihood of the people by using the act excessively,” she said. “The opposition party should return to the assembly to discuss everything with the ruling party, not with the president.”

Since Aug. 1, DP members including Chairman Kim Han-gill have staged a rally at a tent they set up as their temporary party headquarters to draw attention to what it says was meddling by the intelligence service in the 2012 presidential election.

Chanting slogans about “the crisis of democracy,” the DP members say the National Intelligence Service ran an online smear campaign against President Park’s opponent, and that she should issue an apology even if she wasn’t involved in the campaign.

At the meeting among the president and the leaders of the Saenuri Party and the DP, the president promised to reform the spy agency and get to the bottom of the allegations, according to a briefing by a Saenuri spokesman on Monday.

But she said there was no reason for her to apologize for the NIS case because it is still under investigation by the prosecution.

The ruling party head also tried to persuade Kim to return to the assembly so it can start discussions on bills that have piled up since the plenary session nominally began on Sept. 2.

However, after the meeting, DP head Kim said the negotiation failed, and that the party would continue the tent protest even during the Chuseok holidays.

The DP is demanding an apology from the president and reform of the spy agency, led by the National Assembly, not self-reform.

“I don’t understand why the president can’t say the single sentence, ‘I’m sorry for the spy agency’s intervention in the election and domestic politics,’?” Kim said at a party meeting yesterday. He spent yesterday, his 60th birthday, in the party’s tent.

The confrontation between the ruling and opposition parties is expected to continue because of the failure of the talks. Despite the DP’s complaints, Saenuri members trumpeted that the meeting was successful.

“There were solid achievements,” Saenuri Chairman Hwang Woo-yea said at an emergency meeting of senior party officials yesterday. “The president showed her strong will to reform [the NIS] and [improve] the livelihood of the people. We can’t ask for an apology by the president [for the NIS case].”