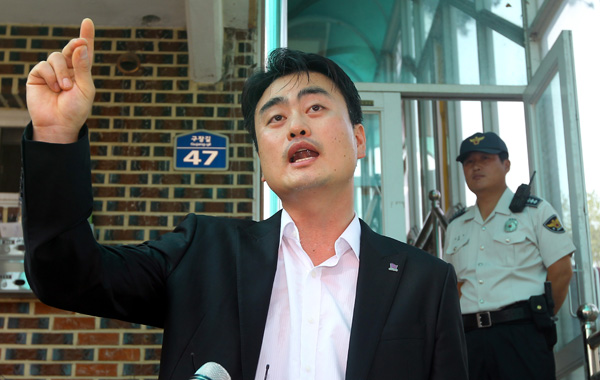 The National Intelligence Service continued its string of raids yesterday on Unified Progressive Party members’ premises, including that of its spokesman, Hong Sung-kyu, as part of the intelligence agency’s investigation into the alleged plot to overthrow the Korean government.

Some of the party members tussled with investigators to stop them from entering the sites of the raids. The investigators, operating with court-issued warrants, seized documents, computer drives and some cell phones. The NIS also searched the cars of some of the members and performed body searches on others.

The five are suspected of violating the National Security Law and plotting to overthrow the government, the same charges filed against the party’s Representative Lee Seok-ki, who is under detention at the Suwon District Prosecutors’ Office.

According to the NIS, Lee attended a meeting of members of a group in the UPP, known as the Revolutionary Organization or RO, on May 12 and discussed plans for assisting North Korea if another war broke out. It said the five UPP members who were the targets of yesterday’s raids attended the May 12 meeting with Lee, and all had spoken at that meeting. The NIS has obtained a recording of the meeting and transcribed it. Sources said the NIS may summon the five for questioning after reviewing evidence obtained in the raids. If any evidence of involvement in the alleged RO conspiracy is found, it will probably lead to detention for them as well.

The UPP called the raids a red herring. “Today’s raid was a way to avoid public criticism of the Blue House and the NIS over Monday’s failed trilateral summit,” Representative Kim Jae-yeon said at a press briefing at the National Assembly yesterday. “The reason the NIS raided the five members’ residences and offices was because it couldn’t find any evidence that could prove the RO had plotted an insurrection conspiracy, except the dialogue transcript, which was fabricated by the NIS.”

Hong, the UPP spokesman, said, “Weeks ago, I declared that I would run in the October by-elections, and that’s why the NIS conducted this raid suddenly, ahead of the Chuseok holidays.”

Separately, the Suwon District Prosecutors’ Office, which is now in charge of the case against UPP lawmaker Lee, has started investigating how a firm connected with the pro-North Gyeonggi Dongbu Alliance won a cleaning services contract from Seongnam city government in 2010.

The prosecution summoned Seongnam government officials and questioned why the firm was selected as a city subcontractor. The prosecutors are trying to find out whether local government funds were used to support UPP-related organizations.

The Social Economy Support Center in Suwon, for example, received about 260 million won ($240,000) per year for small business support. The head of the center is Lee Sang-ho, an adviser to the Gyeonggi Progressive Alliance, who was detained last week after being accused of conspiracy.