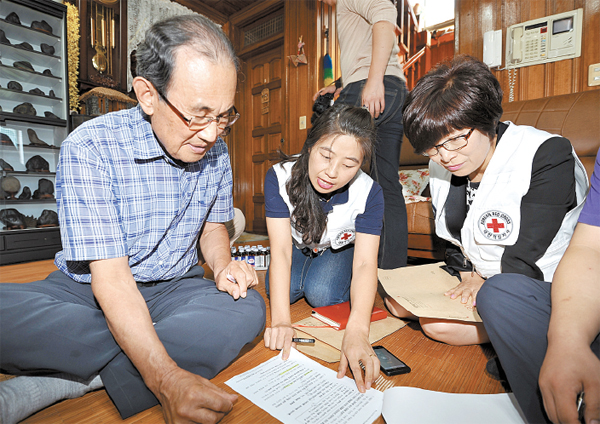 Korean Red Cross officials explain on Monday how to prepare for the family reunion sessions to 73-year-old Lee Jong-sin, left, who was selected to meet his 84-year-old brother living in North Korea. Lee is one of the 96 South Koreans who will meet Northern relatives from Sept. 25 to 27 [NEWS1]

“I know I am getting weaker every day, but I need to know what year and date my parents passed away so I can hold a proper memorial service for them,” said Kim Dong-bin, a 79-year-old man who is one of the 96 South Koreans selected by the Korean Red Cross to meet their family members from North Korea.

“I will go to Mount Kumgang resort to attend the reunion no matter what,” said a determined Kim, who is undergoing chemotherapy to treat his lung cancer.

Kim, who came from Hwanghae Province in North Korea but lives in the east coast city of Gangneung, Gangwon, will meet his 80-year-old sister for the first time in 62 years.

As North and South Korea exchanged final lists of people to be reunited following being separated by the 1950-53 Korean War, the heartbreaking stories of those who lost touch with their loved ones have once again emerged.

As this year marks the 60th year anniversary of the signing of an armistice that ended the three-year conflict, 28 of the people who will travel to the Kumgang resort on Sept. 25 are in their 90s. Most of the others selected are in their 80s, with fewer than 30 people in their 70s or younger.

Lee Myung-ho, an 81-year-old resident of Sokcho in Gangwon, says he has hardly slept in recent days because he is too excited about meeting his youngest brother.

Lee fled to the South from his hometown of Tongchon County in December 1950 with two of his brothers, leaving behind his parents and youngest brother.

Tongchon County is in the part of Gangwon Province controlled by North Korea.

“[From meeting my brother] I will soon know when my parents passed away,” said Lee. Although people in Korea typically hold memorial services for their ancestors on the date of their passing, Lee says he has had to hold the memorials for his parents on their birthdays instead.

Jung Hee-kyung, an 80-year-old Daegu resident, is scheduled to meet his nephew, 64. Jung said he was nervous about the possibility of the reunion being called off because of the volatile nature of inter-Korean relations.

The nephew is a son of Jung’s older brother, who came to the South with him in 1951, leaving a then-two-year-old son in the war-savaged North.

“I have always felt saddened whenever I think of my nephew, who grew up without a father,” said Jung. “My brother passed away four years ago. Of course I feel happy about seeing my nephew soon, but there is a feeling of sadness that comes first.”

Ninety-six South Koreans will meet their North Korean relatives for three days, from Sept. 25 to 27, at the Mount Kumgang resort.

After the three-day meeting, 100 North Koreans who applied for reunions will travel to the South to meet their families from Sept. 28 to 30.

The oldest person from the South participating is Kim Sung-yun, a 95-year-old woman who will be reunited with her 80-year-old sister and two other relatives.

The two rounds of reunions will be the first such meetings in three years.