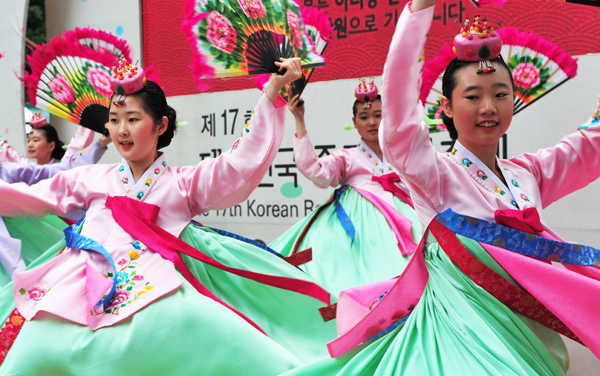 Korean girls perform a traditional fan dance at the Cheonggye Plaza, central Seoul, in preparation for the Seoul Arirang Festival, which begins on Oct. 11. Provided by the organizer

Even if it couldn’t be designated as Unesco’s intangible heritage, Arirang, the country’s traditional folk song, is considered by most Koreans as a second national anthem. But since it became an intangible heritage late last year, a three-day festival is being organized to celebrate the designation.

Attempting to appeal to people of all ages, the Seoul Arirang Festival’s organizing committee have produced collaborative performances of traditional and modern musicians for the 2013 Seoul Arirang Festival, which is set to kick off on Oct. 11 at Gwanghwamun Plaza and Seoul Plaza in central Seoul.

The appearance of DJ Koo the next day may seem like it’ll clash with the whole concept of Arirang, but the second day’s event, “Let’s Dance Arirang,” mixes electronic music with the arirang tune. DJ Koo will be joined by DJ Rubato and DJ R.Tee to turn Seoul Plaza into an “Arirang dance floor.”

On the last day, performers will be joined by the public in a parade in Gwanghwamun Plaza starting at 3 p.m. The name of the parade will be “You Are Arirang.”

Several programs are organized for the public to “feel and enjoy Arirang up close” before and during the festival. For details, visit www.seoularirangfestival.com or call (02)779-7805.