‘Playboy Bong’ all about arousal

‘Playboy Bong’ all about arousal 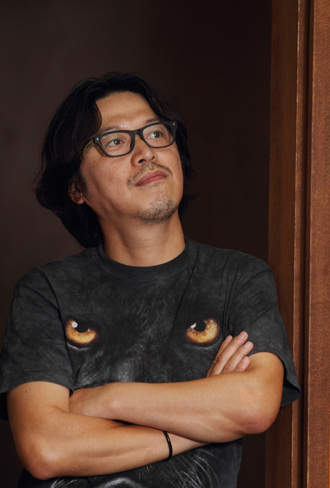 To celebrate the 10th anniversary of his mainstream debut with the 2003 movie “The Sweet Sex and Love,” Bong recently released a movie titled after his nickname, “Playboy Bong,” which looks back on his work over the past decade.

Also, actresses resisted Bong when he urged them to be more explicit in their scenes, but then competed with each other to see who was the most sexy and charming.

Bong even did some acting in the movie to share his values and thoughts on eroticism.

“Many actually tried to stop me, saying I’m no Park Chan-wook or Bong Joon-ho, and it is so sudden that I want to share my stories,” Bong told Ilgan Sports, an affiliate of the Korea JoongAng Daily, at a bar near Hongdae, northwestern Seoul.

“As I have reflected my experiences in 99.9 percent of the movie, I thought it would be good for me to act to add more liveliness.”

Q. Why did you decide to tell stories about yourself?

A. As I have dealt with eroticism until now, I have contemplated about how society takes it, and how the restrictions over the issue are getting loose, as well as where it stands in an industrial aspect. And through those thoughts, I think I came to plan “Artist Bong Man-dae” naturally. I thought it would be fun to talk about Bong Man-dae’s 10-year career in Chungmuro.

I didn’t have any pre-set scripts, but tried to stimulate actors and actresses to act after giving them only circumstantial explanations. It was hard but I was confident that I could finish the work.

In the movie, actresses created some tension. Did you intentionally instigate emotional fights among actresses?

I don’t know what they were thinking in their heads, but they seemed to get along after having a drink or two. When there were problems arising, director Yim Pil-sung [who acted in “The Host” in 2006] suffered the most. He took part in acting for the movie, even though he is a mainstream Chungmuro director, but he also played the role of peacemaker to console actors and actresses when there were troubles rising among them. They listened more to the words of Yim than to mine.

If I were set on making money, I would have been filming nonstop. But I didn’t want to tell the stories that I don’t want to tell. At the time, you got about 4 million won to direct one video. It wasn’t a large sum of money, but enough for one person to live on. I was active in the industry for about three years, from June 1999, and I only made 12 videos. People are surprised to hear that I only made 12 in three years, while others make a lot in a month.

Your work at the time was different from others’ works, which show sexual intercourse but nothing else. Why did you try to do new things like changing the angle of a camera or have an actor and an actress start talking all of a sudden?

I respect that feelings that come before and after intercourse show eroticism, while I don’t really have any interest in showing the action itself. I have also changed my viewpoint over eroticism. When I was young, I showed bed scenes that were approached by some curiosity, but now I try to get to it with more refined manners. Thirty-three-year-old Bong Man-dae was able to make “The Sweet Sex and Love,” but my current self cannot.

How has eroticism become refined and mature?

Young men may think only about their own satisfaction. However, as they get older, they think about how to give pleasure to women as well. They learn to consider their partner. Eroticism should be like that. It should be something not only men like watching, but also women can enjoy. Or, it should be something that a man and a woman watch together. That is a healthier version of eroticism. I usually get inspired from my own experiences, but I’m out at the moment. And I can’t cheat on my wife to make a movie. So I’m reading a lot to get some secondhand experiences.

Have you had a hard time when an idea you worked hard on did not get to be developed?

There were times when I couldn’t pay for my meal. My son is now 8 years old and my daughter is 4. When my daughter was born, I didn’t have the money to pay the fee to have her discharged from the hospital. I asked around to get some money, and since then I have come to think differently about money and what situation it can put me in. I have decided that I can’t always follow my ideals and try to keep my dignity as a director.

What other things do you have a hard time with?

Again, this involves my family. I don’t plan on stopping my research about eroticism. However, I worry about my children getting hurt due to my work. I seriously thought about putting a fake name on the lists of parents’ names, when my child started preschool. I was scared that others would be prejudiced toward my children. After wrestling with my thoughts, I had my child go to a kindergarten managed by a Catholic church. I have become good friends with the reverend mother, so now I have nothing to worry about.

Is your family your greatest supporters?

Of course. I always have three confirmed fans of mine and that makes me be more honorable [in what I do.] My late father-in-law always told me that my time will come. My mother also always cheers for me. When I released my debut work, “The Sweet Sex and Love,” onto Chungmuro, my mom couldn’t tell the title to her pastor, so she called it “The Sweet Sense and Love.”