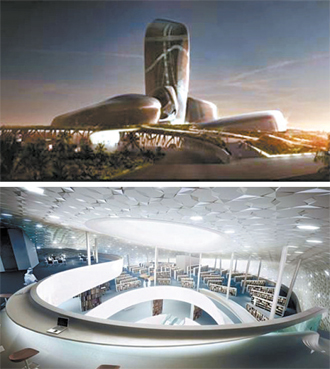 Samsung SDS, the ICT service provider of Samsung Group, is participating in the construction of a cultural center in Dhahran, Saudi Arabia. Construction of the King Abdulaziz Center for World Culture was launched by Saudi-based Aramco, the world’s largest oil producer, to celebrate the 75th year anniversary of its launch. When completed, the cultural center is expected to serve as a landmark of Saudi Arabia and cultural hub of the Middle East.

Among the three fields that invited external partners - building, IT and exhibition - Samsung SDS is taking part in the IT sector, providing an IT package. The company is in charge of the digital space convergence project, or DSC, which is a business model that incorporates high technologies like digital gadgets, wireless and wired networks, software and design to create a futuristic digital space.

“This is the first large-scale case of a domestic company taking part in the global DSC project,” said a Samsung SDS official.

The DSC project in Saudi Arabia is part of the efforts of Samsung SDS to reshape itself as a global company and expand its field of operations. CEO Alfred Koh has been stressing the vision to become a “world premier ICT service provider” under this year’s management policy of achieving “sustainable growth through creativity and innovation.”

With its expertise in the fields of social infrastructure convergence, DSC, Smart Town and electronic government in the Korean market, Samsung SDS has been aggressively expanding into the global market. Furthermore, on July 1 this year, the company even underwent a renovation in its business structure. It downsized domestic business in the public and financial sectors, and newly established ICT outsourcing (ICTO), smart manufacturing and smart town (SMT) sectors to expand its overseas projects.

According to Gartner, a renowned research firm, Samsung SDS saw a huge leap in terms of ranking for global IT services, from 50th in 2009 to 33rd in 2012. Samsung SDS also has more overseas expansions on its way. It announced plans to emerge as a world premier ICT service provider by increasing overseas sales to 30 percent of its total sales by this year and 60 percent by 2017. The company promised to double its total sales by 2017.

“We plan to expand our business to other associated companies of Aramco through this project. Moreover, we will aggressively search for overseas business opportunities in Saudia Arabia and the Middle East, as well as in other parts of the world,” said Chang Hwa-jin, director of Samsung SDS’s global business division.