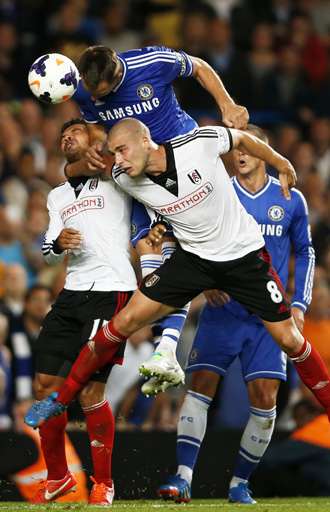 LONDON - Chelsea put a miserable week behind them to return to the Premier League summit with a 2-0 home win over Fulham as the wheels came off Liverpool’s bright start in a 1-0 home defeat by Southampton on Saturday.

A first Premier League goal from Chelsea’s John Obi Mikel, after Oscar had given them the lead, sealed a victory that will help consign to memory last weekend’s loss at Everton and their shock midweek Champions League reverse at home to Basel.

The victory moved Chelsea on to 10 points from five matches, ahead of Liverpool on goal difference after Southampton inflicted a first defeat of the season on the Merseysiders.

Saints defender Dejan Lovren scored with a second-half header to emphatically quieten the premature talk of a title push that had been swirling around Anfield.

Unbeaten Everton celebrated a stunning 3-2 success at West Ham United with Leighton Baines twice equalizing from free kicks and on-loan striker Romelu Lukaku heading a late winner to move them up to fifth with nine points.

Hull City also twice came from a goal down to win 3-2 at Newcastle United and West Bromwich Albion’s debutant Stephane Sessegnon scored against his former club Sunderland in a 3-0 victory that left the visitors stuck at the bottom of the table.

Aston Villa’s deadline-day Czech signing Libor Kozak came off the bench to replace the injured Christian Benteke and then scored his first goal for the club in a 1-0 win at Norwich City.

Chelsea manager Jose Mourinho had sought to make light of their difficult week but was no doubt aware that a third straight reverse would have prompted awkward questions.

“After a bad start that everybody kept telling me was the worst start for a decade, today I go to bed and nobody is in front of us,” he told Sky Sports. “I’m in football for a long time and when results are not good I’m not expecting people to speak well about our team.”

Striker Darren Bent missed a good chance for Fulham when he shot straight at Chelsea goalkeeper Petr Cech when through on goal in the first half, but it was a brief scare in an otherwise comfortable win for the hosts.

A nervy silence greeted the halftime whistle, but normal service was resumed when Oscar tapped home six minutes after the break.

Fulham keeper David Stockdale could only parry a cross from Andre Schurrle as well as Samuel Eto’o’s follow-up and the Brazil international was on hand to prod home.

Nigerian Mikel ensured there was no tension-racked finale as he scored his first goal in 185 league games for the club with a hooked finish after John Terry headed down a corner.

Liverpool were without playmaker Philippe Coutinho after the Brazilian suffered a shoulder injury against Swansea City on Monday and his creative link play was sorely missed as the Merseysiders labored.

Southampton grew in confidence as the game wore on and looked by far the more threatening when Lovren gave them into the lead after 53 minutes.

The Croat easily held off Daniel Agger to meet an Adam Lallana corner and directed his header back across goal and past Liverpool keeper Simon Mignolet.

The visitors held on comfortably to grab their second win of the season and move up to sixth place with eight points.

“I just thought we never got going in terms of our tempo and technically we were nowhere near,” Liverpool manager Brendan Rodgers said on Sky Sports. “To lose the goal from the corner was a double blow, but the players will recover from it.”