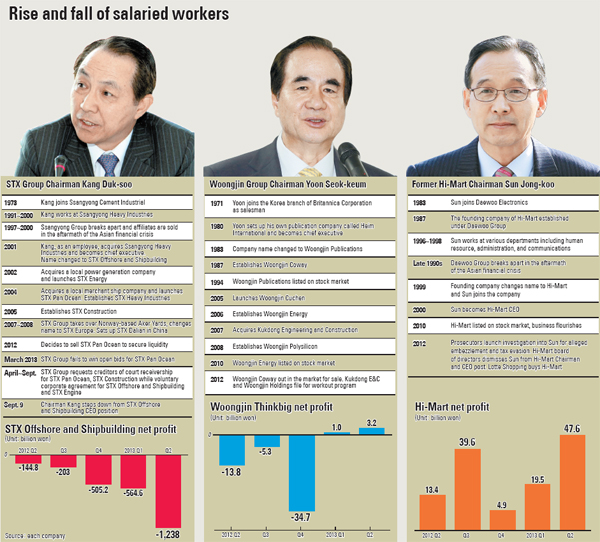 In every country, there are legends in the business world who start their career from the bottom as salaried workers, and after decades of hard work become heads of conglomerates. Korea, too, has such legendary figures to share, although in most cases they don’t seem to have a happy ending.

STX Group Chairman Kang Duk-soo, who has long been considered a successful entrepreneur who started out with nothing but achieved much, is about to lose his title as chief executive officer of the conglomerate’s flagship STX Offshore and Shipbuilding, which he has been steering for more than a decade.

On Friday shareholders of the world’s fourth-largest shipbuilder will meet to officially approve a plan passed by the board of directors earlier this month to appoint a new chief executive. The idea of replacing the CEO of the cash-strapped shipbuilder was raised by the company’s creditors, including the Korea Development Bank, after STX Offshore and Shipbuilding requested a voluntary workout plan for debt relief in April.With Kang being pushed aside from managing the core company of STX Group, entrepreneurs’ high hopes of building up their own businesses and following the path of legends like Kang are starting to fade.

Some even question whether it is the end of the era where salaried men and women could become owners of big businesses and see their names on a list alongside second and third generation conglomerate owners like Samsung Group Chairman Lee Kun-hee and Hyundai Motor Group Chairman Chung Mong-koo.

The career of the 63-year-old Kang has been referred to as a myth of the so-called “salaried man.”

According to industry sources, after graduating from a vocational high school in Dongdaemun, central Seoul, in 1973, Kang joined Ssangyong Cement Industrial under the now defunct Ssangyong Group. He was just like any other employee, working and receiving monthly pay.

Years later, Kang moved to Ssangyong Heavy Industries, also an affiliate of Ssangyong Group, and by the year 2000 had risen from director to managing director to executive director to chief financial officer.

After changing the name to STX Offshore and Shipbuilding, Kang added more businesses to STX Group through mergers and acquisitions, building the group into the country’s 12th-largest conglomerate by assets.

However, the group started to crumble after the 2008 global financial crisis.

“There are three industries that are extremely sensitive to the economy,” said an industry official. “They are shipbuilding, shipping and construction.”

The official noted that there are fewer ups and downs for big industry players like Samsung Heavy Industries, Daewoo Shipbuilding and Marine Engineering, and Hyundai Heavy Industries, but there are more risks for small and midsize players like STX. STX Group began to lack liquidity ahead of maturing loans from STX Pan Ocean. Last year, the group sold its 43.1 percent stake in its energy unit to Japan-based Orix for about 360 billion won ($332.1 million). It also tried to sell STX Pan Ocean in March, but there were no bidders, forcing the group to ask creditors for a court receivership program.

“The aggressive merger and acquisition plan could have boosted business at the group, but at a time of economic difficulty it rather dragged down the conglomerate,” said a financial industry official.

“Now isn’t the time to pick someone to be responsible,” the labor union wrote in a statement. “What’s important right now is to normalize business.”

Shim Hyung-seok, a business management professor at Youngsan University, agreed. “It is true that from a short-term perspective, STX Group’s strategy to expand its businesses ended up as a failure,” said Shim. “But it is too much to point fingers at only Chairman Kang.”

According to Yu Kwan-hong, a professor at Pusan National University who was former president of Hyundai Heavy Industries, Kang should be given the opportunity to recreate an environment where young people in Korea are not afraid of making another so-called Kang Duk-soo myth.

“Above all, he was a businessman who succeeded in managing a crisis [salvaging Ssangyong Heavy Industries].”

Meanwhile, there are other cautionary tales of salaried men including those of Chairman Yoon Seok-keum of Woongjin Group, whose downfall was his 2007 decision to purchase a construction company, and former Hi-Mart CEO Sun Jong-koo.

Yoon started as a salesman at the Korean branch of Britannica Corporation in 1971 where he was one of the most prominent employees. After nine years at Britannica, Yoon, at the age of 35, established his own publication company called Heim International, a foundation company of Woongjin Group. The seed money that was used back then was just 70 million won. Like Kang, Yoon also was an ambitious businessman who started a water purifier manufacturing company in the late 1980s.

However, aggressive M&A also caught up with Woongjin Group and Yoon.

The group purchased Kukdong Engineering and Construction in 2007 for about 660 billion won, and with the global financial crisis, liquidity started to turn sour.

Sun, former CEO of the nation’s largest electronics retailer Hi-Mart, was also known for his rise from the ranks of salaried men.

Sun joined Daewoo Group in 1983, then turned the electronics unit that was struggling in the aftermath of the Asian financial crisis in the late 1990s into Korea’s leading electronics retailer.

The once troubled company was even listed on the stock market in 2010.

However, conflict with its major shareholder over management control led to an investigation of illicit business acts, which forced him to step down as head of the retailer after 13 years.

Hi-Mart was then sold to Lotte Group, which is now the largest stakeholder.