Emigre doctor ‘gives back’ on island

Emigre doctor ‘gives back’ on island 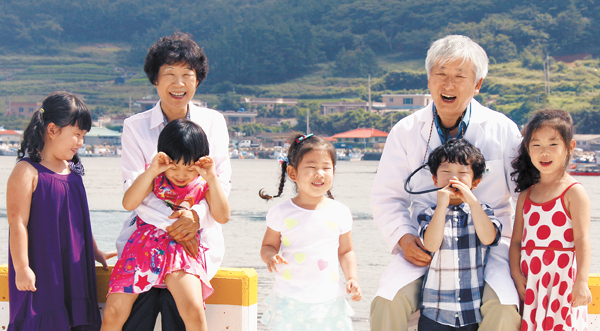 Dr. Jung Woo-nahm, right, a pediatrician on a small island off the coast of South Jeolla, and his wife Park Sung-ja, left, pose with local children. Jung gave up a successful career in the United States to provide medical services to local children. He said that although he has three grandchildren, he has gained “many more grandchildren.” By Oh Jong-chan

Many Korean islands have become preserves of the elderly. Wan Island in Wando County, South Jeolla, is an exception. Its main business is its thriving abalone industry, and Wan is home to many young fisherman and their families. The same goes for neighboring Bogil and Soan islands.

Taken together, the population of the three islands in Wando County is more than 10,000 people, and 1,300 are children.

That may be a healthy demographic, but the health of the children used to be a big concern on the three islands because there was no resident pediatrician. Children who fell ill had to go to the mainland by boat to find a doctor in Wando or Haenam counties.

But two years ago, Jung Woo-nahm gave up a successful practice in the United States and dedicated his silver years to taking care of the islands’ kids in his home province of South Jeolla.

He moved to Wan Island and set up a health center named “Happy Clinic,” in Nohwa-ri.

He’s brought his own medical style to Korea. Even if his young patient is suffering from a mild cold, he conducts a full body examination. He avoids prescribing unnecessary medicine or shots.

He spends at least 20 to 30 minutes diagnosing and treating each child carefully explaining medical issues to them and their parents.

The locals were at first disconcerted by his ways.

“At first, mothers who were used to 1 to 2 minute treatments said, ‘We want medicine no matter what,’ or ‘Just give a quick shot,’ or ‘Why does it take so long to treat my child?’” recalls Hwang Hu-nam, a 36-year-old local mother. “Some even became angry about how long it took.”

That reaction changed with time, especially since Jung only charges 500 won ($0.46) per consultation.

“Many people think of Dr. Jung as a true father figure for giving so much affection to each child,” says Hwang, “and imparting words of wisdom in parental education.”

To show their gratitude, islanders bring rice cakes, fresh vegetables or agricultural produce to the clinic. Some leave fresh seafood on the doctor’s doorstep, just 10 minutes away from the clinic. Some residents planted sweet potatoes, peppers and eggplants in Jung’s backyard.

“At night, if the doorbell rings, there are times when I find someone has left freshly caught fish, fruits or vegetables,” Jung says.

“Working at my island hometown is to repay the debt in my heart as I lived in the United States after completing my education here,” said Jung.

Jung is from Damyang County in South Jeolla and completed his medical studies at Chonnam National University. He went to the United States in 1973 and practiced pediatrics and family medicine in Houston, New Jersey and Virginia.

But he also went on medical missionary trips to Mexico, China and other countries.

“I thought I would like to treat patients without worrying about money,” he says

In 2005, at the age of 62, he handed over his practice to his 40-year-old son, who is also a pediatrician, and went onto his second career.

For six years, he served on the faculty at Yanbian University of Science and Technology in Yanji, Jilin Province, northeastern China, which borders North Korea and is home to many defectors. Then he heard that his home province of South Jeolla was looking for a volunteer doctor to work on a remote island. He took the job without hesitation.

Locals have also crowned him with laudatory nicknames such as “Hero of the Beautiful Twilight” and “Embodiment of Noblesse Oblige.”

Jung’s wife Park Sung-ja also volunteers teaching English reading and writing at least twice a week to elementary and middle schoolers on the island. She spends weekends volunteering at an elementary school.

Jung found a way to expand his “Happy Clinic” recently. Dr. Park Jun-il, 68, who also practiced in Houston before, heard of Jung’s work and from next March will practice on another remote island in South Jeolla, Sinui Island in Sinan County. Park, a graduate of Yonsei University, has practiced in the United States since 1982 as an internal medicine specialist.

“In life, I think the end is far more important than the beginning, and the joy and merit of providing my talents in a place where the air is clean is like killing two birds with one stone,” Jung says. “So long as my health permits and I am able to do my best, I want to remain friends of the islanders and their children for a long time.”