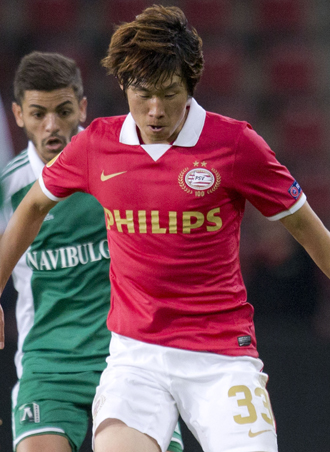 In the seventh-round match held in Philips Stadion, Park, 31, started the game as the team’s right winger in the 4-3-3 formation, then showed off his English Premier League experience in front of passionate fans. The goal he scored in the 68th minute was his second of the season.

PSV scored all of its goals during a 15-minute spell in the second half, taking over as leaders in the Dutch league. Before the game, some local media doubted that Park had enough stamina to play a full game, but Park dispelled those worries with his furious activity on the field.

Tim Matavz took advantage of a defensive blunder to open scoring in the 53rd minute, followed by goals from Jetro Willems and Oscar Hiljemark in the 61st and 64th.

The highlight for Park came in the 68th minute. By breaking Ajax’s offside trap, he struck the right side of Ajax’s net in a one-on-one situation with the Ajax goalie and sealed PSV’s victory over its biggest rival. Park earlier set up PSV’s third goal for Swedish striker Hiljemark.

PSV moved two points clear at the head of the standings with 15 points and remains the only unbeaten side after seven rounds. Ajax remains at 11 points, amid a cluster of clubs.

Meanwhile, PEC Zwolle fell from first place after losing for the second successive week, this time 3-0 against Vitesse Arnhem, for whom Brazilian teenager Lucas Piazon, on loan from Chelsea, scored twice.

PEC had been the surprise early leaders through the first six weeks of the season but coach Ron Jans was philosophical about the end of their unexpected run.

“We were beaten in the key phases and duels, but I don’t think we need to panic, just continue doing what we were doing,” he told Dutch station Radio 1.

Feyenoord, after its worst start to a season, won its third straight match with a 35th-minute goal from 18-year-old Tonny Vilhena, settling their home match against FC Utrecht.

The Rotterdam-based team moved up to eighth place, with 10 points in seven matches.

NAC Breda also look to be putting their slow start to the season behind them as they won a second successive game, a convincing 3-0 home triumph over AZ Alkmaar.