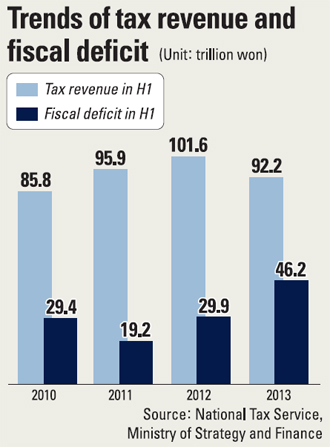 Is a tax increase inevitable?

President Park Geun-hye has been determined to expand tax revenue without raising rates since the beginning of her administration, but her recent remarks imply there could be some tax increase on the premise of public consensus.

“Even after adjusting the spending plan and reducing tax exemptions, if the government still lacks sources to finance welfare programs it could raise some taxes based on public consensus,” Park was quoted as saying by Yeo Sang-kyu, senior secretary of the ruling Saenuri Party after the president met with leaders of the ruling and opposition parties last week.

Although government officials say the president has not changed her stance on a tax increase, current figures show it will be impossible to afford necessary spending next year without a shift in tax policy.

The Ministry of Strategy and Finance said yesterday it would be able to cut about 1 trillion won ($929 million) in spending by the end of this year. It initially planned to slash 84 trillion won.

The ministry reduced spending on subsidies for power consumption and renewable energy infrastructure as well as support for national universities.

However, it has failed to reduce spending on social overhead capital projects planned for the provinces due to strong opposition from local governments demanding even higher subsidies for the free child care program.

Worsening the situation is declining tax revenue and growing deficits amid the prolonged economic downturn.

In the first six months of this year, the National Tax Service collected 92.2 trillion won, down from 101.6 trillion won a year earlier.

Nonetheless, Finance Minister Hyun Oh-seok said tax increases are not on the table.

“The president’s remarks were no more than theory,” Hyun said. “Before raising taxes, cutting tax exemptions and digging out the underground economy should come first.”

By doing so, the?Finance Ministry estimates it can secure an additional 18 trillion won.

“It is wrong to say tax rates should be raised, since tax revenue is decreasing,” the minister emphasized.

Instead, Hyun has ordered cutbacks in next year’s budget, slashing the budget for domestic and international events - including academic conferences and sports events - by a third.

Ahead of the ministry’s announcement of the 2014 budget this week, government branches are grumbling about cuts.

“Government officials at each branch are concerned about likely budget cuts in the upcoming 2014 budget plan,” said an official at the Sejong government complex.

“It is more important to mull over how to spend wisely than raising taxes,” said Kim Kwang-soo, president of KS Economic Research Institute, in his recent book. “The current situation is just like water off a duck’s back. A reasonable overhaul is necessary in the government expenditure plan.”