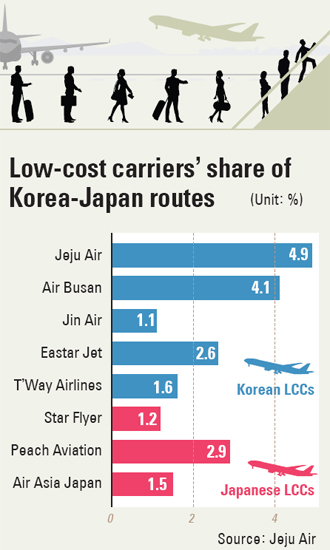 Korean low-cost carriers (LCC) nearly doubled the number of passengers on their Japan routes during the first half of the year compared with the same period in 2012.

According to the carriers, 1.1 million people have used LCCs for travelling between Korea and Japan from January through June. Last year there were 594,000 passengers.

In addition, LCCs transported 20 percent of all travelers who flew between the two countries, up 9.5 percentage points from a year ago.

Currently, five Korean and three Japanese LCCs fly between the two countries, with the Korean LCCs carrying 14.4 percent of passengers and the Japanese 5.6 percent.

Experts say the gap between Korean and Japanese LCCs will increase as Korean companies aggressively expand service to Japan’s large cities and regions like Sapporo, Okinawa and Nagasaki.

Jeju Air, Korea’s largest LCC, has been flying from Incheon to Tokyo 14 times a week since July and will double the number of weekly Incheon-Fukuoka flights to 14 beginning Oct. 27.

Jin Air also started an Incheon-Nagasaki route in July and T’Way Airlines is preparing to launch an Incheon-Kyusu route by the end of the year.

Among the three Japanese LCCs flying to Korea, Peach Aviation increased its Osaka-Incheon flights and launched an Osaka-Busan route Sept. 13.

However, Air Asia Japan, a joint venture of Air Asia and ANA Holdings, will end service to Korea on Oct. 26. ANA Holdings will rebrand the carrier to Vanilla Air and is expected to announce its flight schedule this month.

Industry insiders speculate foreign LCCs will face tough challenges in the Korean market, not only in attracting more passengers but also in service.

According to a Korea Consumer Agency report in August, Peach Aviation had the highest number of complaints per 100,000 passengers for 2012 and the first half of this year.