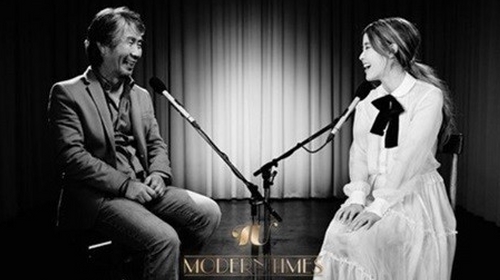 Two weeks before the release of her new album, “Modern Times,” singer IU has revealed the names of the songs on her record and released a teaser video.

On the YouTube channel for her agency, Loen Entertainment, she released a one-minute teaser for “Between the Lips (50 cm)” yesterday, the bossa nova-tinged lead-off single, to raise expectations of her upcoming album, coming out on Oct. 7.

“It is a slow song that depicts emotions of a woman who has started to feel love,” said a promoter for the album.

Until the full release of the album next month, IU will make seven more teasers.

The album will have 13 songs in total, including several high-profile duets with Ga-in of Brown Eyed Girls, Jonghyun of SHINee and Choi Baek-ho.

In addition, IU had a hand in composing the music and lyrics for several songs on this album, as she attempts to transition into becoming a full musician and not just a singer, said her management.