DP vows return to the legislature

DP vows return to the legislature 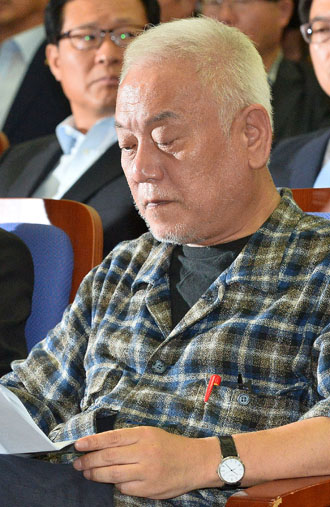 Kim Han-gill, chairman of the main opposition Democratic Party, reviews materials yesterday at a DP lawmakers’ meeting at the National Assembly in Yeouido, Seoul. At the meeting, the party said it would return to the Assembly. [NEWSIS]

The main opposition Democratic Party said yesterday it would return to the National Assembly after weeks of paralysis while it protested the National Intelligence Service’s alleged interference in last year’s presidential election.

But it said it would continue its protest along “two tracks”: It will carry on protesting at Seoul Plaza outside Seoul City Hall and will also conduct some protest activities at the National Assembly.

The announcement offered some hope that operations at the National Assembly will start to normalize and legislation may start to be passed.

“The level of protest inside the National Assembly should be strengthened,” said DP Chairman Kim Han-gill at a general meeting yesterday morning in the presence of some 100 of its lawmakers.

Although some members proposed extreme measures such as a hunger strike or the shaving off of hair, Kim promised a vaguer method of “presenting our resolution.”

The DP will open an around-the-clock emergency headquarters at the National Assembly, he said, that would be headed by the floor leader and senior leaders. Some of the party’s lawmakers will be sleeping and eating in tents at the National Assembly. In the meantime, Kim plans to tour the nation to continue the DP’s protest against the ruling party’s alleged acceptance of NIS interference in last year’s election.

“Over seven months have passed since the Park Geun-hye government was launched, but there is no sign of the economy or the livelihood of citizens improving. Instead, ordinary citizens and the middle class are becoming ever more miserable,” Kim said. “We cannot expect the main party to resolve the problem. The DP should do it. We have promised to prioritize the livelihoods of ordinary citizens.”

The chairman noted, however, that the party won’t entirely boycott the lawmaking process at the legislature.

“Lawmakers should, in any environment, work hard at the National Assembly,” he said. “An internal protest of opposition lawmakers is a privilege as well as a duty. This is the right path to gaining public favor.”

Kim said his new policy was in line with that of former President Kim Dae-jung, who said that lawmakers should never give up on the National Assembly. The former president handpicked Kim, then a novelist, to become a politician in the late 1990s.

The 100-day regular session of the National Assembly started on Sept. 2, but the only meetings to be held so far were two to allow the arrest of Unified Progressive Party Representative Lee Seok-ki on charges of plotting a rebellion against the government.

The paralysis has elevated fears that administrative audits scheduled for next month could be postponed.

Although President Park and the leaders of the ruling and opposition parties met last week to end the paralysis at the Assembly, they failed to reach any agreement.

“It is very fortunate that the DP has belatedly agreed to join the proceedings of the regular session of the National Assembly,” said floor leader Choi Kyung-hwan yesterday afternoon.

“We will do our best to normalize the regular session as soon as possible.”

But the party expressed concerns over the DP’s decision to protest at the assembly itself.

“The National Assembly is supposed to be the venue for presenting constructive criticism and rational alternatives and enhancing the degree of perfection in laws and the system,” it said. “The opposition party should keep in mind that indiscriminately blocking the passage of bills related to people’s livelihoods will eventually victimize citizens.”

The president said last week that the DP is taking advantage of the newly-revised National Assembly Act to block legislative action. The act blocks passage of bills unless over 60 percent of lawmakers agree. The revision was meant to keep a majority party from railroading through bills without compromise with the opposition. Such railroading led to physical violence at the Assembly in the past, which representatives became embarrassed by and are trying to avoid.

The act now also prohibits an Assembly speaker from bypassing a standing committee to bring a bill directly to the floor unless it addresses a national emergency or natural disaster.