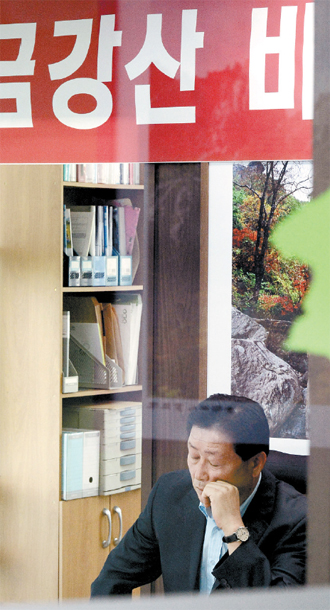 Shin Yang-soo, vice president of an association of businesses at Mount Kumgang resort, is disappointed by the cancellation of reunions and the breakdown of negotiations on resuming tours to Mount Kumgang. [NEWSIS]

Disappointed by North Korea’s canceling of this week’s reunions of war-separated families, South Korea warned that there would be no negotiations on resuming business at the jointly-run Mount Kumgang resort.

North Korea continued to condemn South Korean President Park Geun-hye’s “confrontational policies” yesterday, which it claimed would bring “crisis” to inter-Korean relations. It was the third consecutive day of complaints following its unilateral scrapping on Saturday of the reunions, which were scheduled to start on Wednesday for six days.

“The government will deal with the matter of the Mount Kumgang resort separately from that of family reunions,” Kim Eui-do, South Korea’s Ministry of Unification spokesman, told a briefing yesterday. “The resumption of Kumgang tourism requires an investigation into the [July 2008] shooting incident [of a South Korean tourist], and the guarantee of safety of tourists.

“At this moment, we say it would be difficult to reopen the resort,” he continued. “We think talks about the resort will not be able to take place.”

In August, both sides agreed to hold talks to reopen the resort in Mount Kumgang, located in North Korean territory and run by South Korea’s Hyundai Asan. Tours to the resort stopped after the South Korean tourist was fatally shot by a North Korean guard in July 2008 for unknown reasons.

The two sides disagreed over the timing of the talks from the start. While Pyongyang wanted them to begin in August or early September, Seoul insisted on holding the reunions first. Eventually, North Korea indefinitely postponed both reunions and the Kumgang talks.

The ministry spokesman added that all plans for additional reunions or video conferences, which were scheduled for October and November, are now off.

“As North Korea unilaterally put off [the reunions], we will have to see the ongoing situation and see what to do next,” Kim said.

Liaison officials of South and North Korea exchanged routine communications at the truce village of Panmunjom yesterday, but there was no comment from the Northern side about the reunions, according to the Unification Ministry.

But the North’s state-run Rodong Sinmun media yesterday criticized the Park administration’s so-called trustpolitik policies, which is also called a “trust-building process on the Korean Peninsula,” referring to them as “anti-DPRK confrontational policies.”

“If the South adheres to anti-unification principles and moves toward confrontation, we will never avoid the stern judgment of history and the people,” it said.

Following the reopening of the Kaesong Industrial Complex and the scheduling of the reunions this month, many media reports in South Korea said Park’s trustpolitik policies managed to “change” North Korea and ease tensions on the Korean Peninsula.

The Rodong Sinmun said it was “totally nonsense” to say Park changed the regime. “We have never been under pressure to restart a dialogue or cooperation [with South Korea],” an editorial in the newspaper said yesterday.