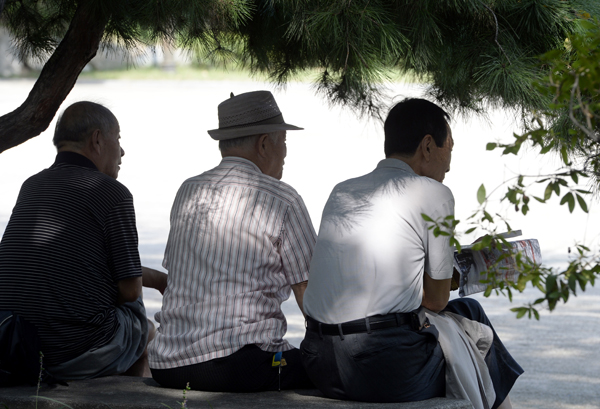 The Park Geun-hye administration is taking heavy flack following the revelation Sunday that Minister of Health and Welfare Chin Young will tender his resignation for failing to fulfill a presidential campaign pledge to give higher welfare benefits to all seniors.

Because of the cost, the ministry is scheduled to come up with a revised plan for the basic pension Thursday that offers much less than promised.

After one of Chin’s key aides leaked the news to a local media outlet Saturday, the Blue House scrambled to minimize the blowback from walking away from a key welfare pledge.

The fact that Chin’s intention to step down was released to the media instead of by an official announcement from the government has made things worse for the Blue House.

“Saying that Minister Chin is resigning to assume responsibility for breaking the campaign pledge has bloated the controversy and deprived the government of a chance to explain properly,” said an official at the Blue House who asked not to be named.

Park, who has a history of strictly keeping her promises, had Chief of Staff Kim Ki-choon preside over a routine meeting with senior secretaries yesterday, which she usually does.

Senior Press Secretary Lee Jung-hyun said later in the afternoon in a briefing that the president would preside over a Cabinet meeting Thursday and talk about the pension issue. The meeting is usually led by the prime minister.

The ministry is known to be discussing a 200,000 won monthly basic pension for most senior citizens in the lower 70 percent income brackets.

The opposition Democratic Party took the opportunity to rail against the administration.

The change in the plan “is making fools of 5.36 million senior citizens aged 65 or over as well as the entire citizenship,” said Kim Kwan-young, senior spokesman of the opposition Democratic Party.

Chin is currently on a visit to Saudi Arabia to promote medical tourism to Korea and is expected to make public his resignation offer after returning tomorrow.

He is one of the key authors of Park’s promises on welfare issues during her campaign.

Her promise of a monthly pension for the elderly, on top of a number of other increases in welfare, worked in her favor during the election.

According to exit polls by the three major broadcasters, 62.5 percent of voters in their 50s gave their votes to Park and a whopping 72.4 percent of those aged 60 or older voted for her.