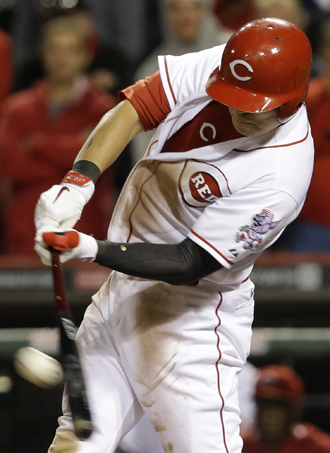 Choo Shin-soo of the Cincinnati Reds singles off New York Mets relief pitcher Sean Henn to drive in the winning run in the 10th inning in Cincinnati, Monday. [AP/NEWSIS]

Choo Shin-soo of the Cincinnati Reds drove in the winning run with a single in the 10th inning yesterday, leading the Reds over the New York Mets, 3-2. With two stolen bases - his 19th and 20th - in the game, Choo became the first leadoff hitter in National League history with at least 20 home runs, 20 stolen bases, 100 walks and 100 runs in a regular season. The Reds clinched their third playoff spot in four years shortly after the win.

Greg Burke of Mets gave up a one-out single to Devin Mesoraco in the 10th, and Derrick Robinson singled him to third. Choo followed with his third hit of the game, off left-hander Sean Henn, a drive high off the wall in left-center. Because Choo headed for the dugout after crossing first base, the hit was recorded as a single.

Choo drove in the Reds’ first run of the game with a single in the bottom of the second and hit a double in the ninth. Choo also stole third base in that inning, joining the 20 home runs-20 stolen bases club for the third time in his career, but the first since 2010.

“I’m happy because the team won and clinched a playoff spot, not because of the 20-20 thing,” Choo said. “I will prepare for the next games to win the division.” As of yesterday, Choo is hitting .285 with 21 home runs and 20 stolen bases.

It was a notable win for the Reds - their 90th of the season, the third time in the past four years that they have reached the mark under manager Dusty Baker. They haven’t had so many 90-win seasons since the Big Red Machine teams of the 1970s.

“I was rooting for the Nationals to win,” Baker said. “That would get us one step closer to the Cardinals .?.?. We’ve still got five big games to go .?.?. There’s a lot of baseball to go.”

Johnny Cueto made a second solid start since coming off the disabled list, an encouraging sign for Cincinnati’s postseason plans. The right-hander has been sidelined three times by soreness near his shoulder.

Cueto went seven innings and allowed two runs (one earned) on three hits Monday night. He walked three and struck out five. He threw 99 pitches, 60 strikes. It was his second start since returning from the disabled list with a strained lat.

He gave up two runs - one earned - on Lucas Duda’s sacrifice fly and solo homer, which snapped a 0-for-17 slump. In two starts, Cueto has allowed eight hits and one earned run in 12 innings.

“The other guys have pitched great but Johnny was the man,” Baker said. “Nothing against anyone else, but Johnny has a longer and greater track record. It was a matter of endurance.”

Cueto’s 99-pitch outing was the most encouraging part of the night for the Reds, who could have their ace back for the playoffs. The Reds sustained their hopes of another division title by winning another long game - they are 13-9 in extra innings.

This season, the Reds have stayed in contention despite losing Cueto, setup relievers Sean Marshall and Jonathan Broxton, and cleanup hitter Ryan Ludwick for most of the season. Ludwick tore cartilage in his right shoulder while sliding into a base on opening day and was out for more than three months.

They were six games out on Aug. 9, in danger of falling out of the division’s three-team race. They regrouped and have taken the race down to the final week by winning 12 of their past 17.