PL players not ready for my team, Hong says

PL players not ready for my team, Hong says 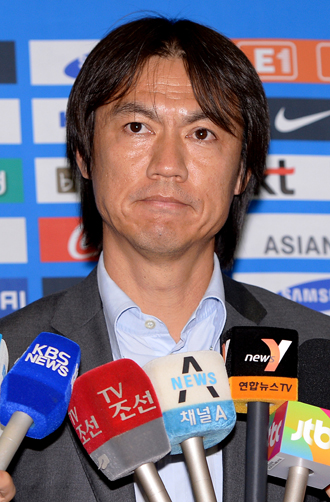 Coach Hong Myung-bo said he will not call up striker Park Chu-young of Arsenal for the Korean national football team’s exhibition games in October. During the Chuseok holidays, Hong went to the U.K. to see Korean players in the English Premier League, including Park, who hasn’t gotten a chance to play for the Gunners, and midfielder Ki Sung-yueng, who hasn’t been called up to the national team since a controversial SNS scandal.

Hong returned to the country on Monday and held a press conference at Incheon International Airport. “I have principles in running this team,” Hong said when reporters asked whether he will ask Park to join the national team for an exhibition match against Brazil (Oct.12) and Mali (Oct.15). “And I can’t change these principles because we are in a difficult situation [having hard time finding a decent striker].” Hong has been telling media that he will not add any players if they haven’t played enough time on their club teams.

“I met Park in London and was able to hear many things about him,” Hong said. “He recently joined the team’s regular trainings after recovering from an injury. I can’t tell all the details, but he has been in difficult situations due to many small and big issues.”

After wrapping up one season in Spain, Park tried to find a new team during the offseason but failed. The Arsenal FC included Park on its 25-man roster but never used him in any official games. He was also excluded from the Champions League rosters.

Park’s situation is a headache for Hong. Sources in the Korean Football Association said that Hong once considered calling Park to the team in October, but his physical condition was way below Hong’s expectations. “He didn’t play in official games too long,” Hong said.

“When we think about the London Olympics, I think Park is still in Hong’s mind,” a coaching staff member on Hong’s team told the JoongAng Ilbo. “But I think it is too early to put him on the team because it will place the manager in a difficult position to put Park on the Brazil World Cup roster if he struggles in the October matches. If he comes back, he should be ready for a full-time game in sharp.”

Ahead of the 2012 London Olympics, Park was criticized for acquiring a green card from Monaco. Park said the green card was necessary to continue his career in the European league and promised that he will enter the military after he retires, but the public saw Park’s behavior as draft dodging. However, Hong supported Park at the time, saying, “I will go to the military for Park if he doesn’t keep his word.” Koreans won the bronze medal by beating its biggest rival, Japan.

“It means that Hong can add Park someday if he thinks Park really is necessary,” the coaching staff member said.

It means that Park needs to show his manager that he is still worthy. “One good thing I was able to see from Park was that he really wanted to play for the country,” Hong said. “I think he already knows what he has to do.”

Regarding midfielder Ki, Hong said he still needs more time. Ki moved from Swansea City to Sunderland FC weeks ago, and the new team’s manager was fired on Sunday local time. The KFA will announce the roster for the October matches next week.