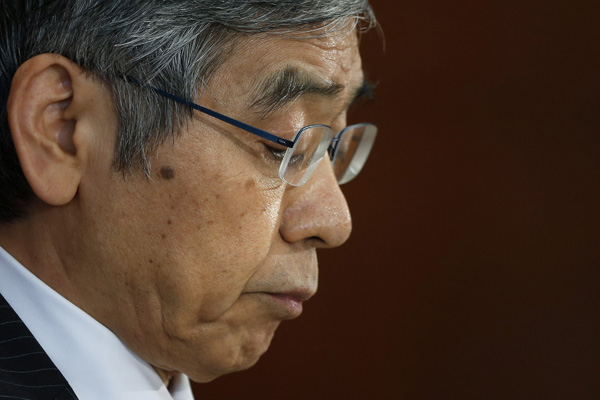 Japan’s implied forward yield, which indicates bond investor expectations of the two-year note rate in 2015, has fallen to the lowest since April 4 when Kuroda began unprecedented stimulus, at 0.24 percent last week. That suggests the market doesn’t expect inflation pressure to push up yields for at least two years. The equivalent rate in the U.S. declined to a month low of 1.8 percent on Sept. 18.

While Japan’s consumer prices excluding fresh food rose 0.7 percent from a year earlier in July, the fastest increase since 2008, a bond market gauge is signaling inflation of 1.36 percent over the next five years, falling short of the BOJ’s 2 percent target by 2015. BOJ board member Takahide Kiuchi said on Sept. 19 it’s “highly uncertain” whether the goal can be met in two years and that the inaction of Fed Chairman Ben S. Bernanke’s board shows how hard it is to end unconventional policy.

“There are fewer and fewer investors who expect the BOJ to achieve the inflation target,” said Toru Suehiro, a market economist in Tokyo at Mizuho Securities, one of the 23 primary dealers obliged to bid at Japanese government bond sales. “Most people anticipate additional easing, so shorter-term yields are more likely to fall as the clock keeps ticking” toward its two-year deadline, he said.

The implied forward rate slid to a record 0.095 percent on March 8, about a week before Kuroda was appointed governor, amid speculation the BOJ would expand monetary stimulus to end 15 years of deflation that’s weighed on consumer spending.

Japan’s core consumer prices probably rose 0.7 percent from a year earlier in August, the same pace as July, according to the median estimate of economists surveyed by Bloomberg News before the release of the data on Sept. 27.

That inflation gauge will climb 1.3 percent in the year starting April 2014 and 1.9 percent in fiscal 2015, BOJ board members forecast in July, excluding the effects of a planned sales-tax increase to 8 percent from 5 percent in April.

In the U.S., the price index for personal-consumption expenditure rose 1.4 percent in July from a year earlier, compared with the Fed’s long-term target of 2 percent.

The Federal Open Market Committee unexpectedly kept its $85 billion pace of monthly debt purchases on Sept. 18. It said price growth “persistently” below its objective could pose risks to the economy.

“The Fed’s decision not to taper implies that it’s extremely difficult to envision the BOJ’s 2 percent target being achieved in two years,” said Akio Kato, the team leader of Japanese debt in Tokyo at Kokusai Asset Management, which manages the equivalent of $38 billion. “The BOJ is highly likely to add monetary stimulus should we see any softness in the economy after the sales-tax increase.”

Japan’s growth is expected to slow as higher taxes may depress consumer spending. Gross domestic product is estimated by economists to expand 1.55 percent in 2014, after adjusting for inflation, down from 1.9 percent this year.

The yield on Japan’s benchmark 10-year note slid to as low as 0.665 percent last week, a level unseen since May 10. It was at 0.685 percent yesterday. The five-year break-even rate, an indicator of inflation expectations that shows the difference between nominal bond yields and those on inflation-linked debt, has fallen from an all-time high of 1.89 percent on May 23.

The yen’s 12 percent depreciation against the dollar this year, the worst performance among 10 major currencies, has supported Japan’s efforts to boost consumer prices. A weaker currency tends to increase import costs.

Local exporters’ competitiveness has also been bolstered by the weak yen, aiding Prime Minister Shinzo Abe’s economic stimulus policy, known as Abenomics. A government report showed on Sept. 19 that overseas shipments climbed 14.7 percent in August from a year earlier, the most in three years.

“Abenomics will continue to boost Japan’s economic expansion steadily,” Mitsumaru Kumagai, the chief economist at Daiwa Institute of Research, told reporters on Sept. 20 in Tokyo. “The tax hike will improve government finances in the long run, and postponing the step could ruin the positive impact we’ve seen so far,” he said.

Bond investors’ confidence in Kuroda’s ability to stoke consumer prices increases will be tested on Oct. 8, when the Ministry of Finance plans to resume offering inflation-linked notes. Deflation prompted the ministry to suspend their issuance in August 2008.

Increasing inflation expectations is “by no means easy” and the BOJ will continue to take appropriate action, Kuroda said on Sept. 20. BOJ Deputy Governor Kikuo Iwata said he’s confident the 2 percent inflation target will be met as the central bank’s stimulus spurs household spending, in a letter to the Sankei newspaper published yesterday.

Bernanke may have refrained from tapering in part because he’s aware of the history of Japan’s monetary policy, according to Masashi Murata, a currency strategist in Tokyo at Brown Brothers Harriman & Co.

The BOJ ended its first round of quantitative easing in March 2006 after five years, declaring that it had fulfilled its commitment to maintain the program until core inflation was stably above zero. Core consumer prices rose 0.1 percent that month.

The central bank had to resume buying assets as a stimulus step in October 2010 after living costs tumbled 1 percent or more in the months preceding the decision.

Had the BOJ delayed an end to quantitative easing in 2006, the limits of the policy could have been better understood, said Murata. The premature withdrawal of the program “resulted in excessive expectations of QE and dependence on it,” he said.